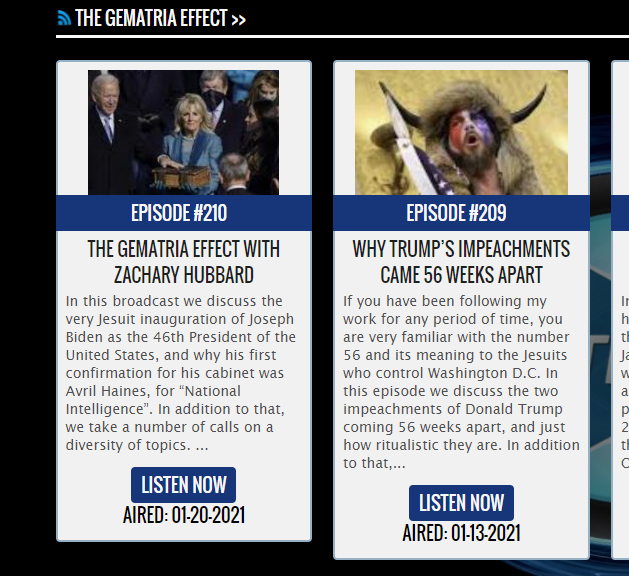 I've been following the 218 a whole lot recently and Bobby pointed out to me that Zach will be doing his 218th episode of The Gematria Effect soon. If he doesn't miss an episode it will be aired on 3/17/2021.

We will see if he misses a show in the coming weeks, but 3/17 would be an interesting day for the 218th episode...
Notice his first ever Gematria Effect episode was 3 months 17 days before the Christmas Eve car crash and 317 days before his bday.
Zachary Hubbard=66
The 66th prime is 317.

The date is also interesting because it's St. Patricks Day and it falls 126 days before Zach's bday.
Ireland=126, 251(FB) and 152(FB)
St. Patrick=126
The Gematria Effect=152
Zach's first Gematria Effect episode was on the 251st day of 2016.
Recall that the number 251 was important to the RV Christmas bomb too, and Bobby was telling me how many people believe the RV bombing was  inspired by the Irish Republican Army..this is because he left a timer on the bomb which warned people before it happened much like something the IRA would do.....In relation to the 9/11 symbolism with the RV attack too, the Irish Republican Army did the Warrington Bombings on 2/26/1993 too...the same day of the WTC bombing before 9/11.