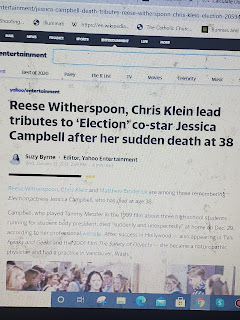 My internet has been cutting out for the last few hours and now been out for some time .I planned on making a video tonight, but I guess I'll just do more posts with my phone.
Anyway, just before it went out, Yahoo had. Headline article about Reese Witherspoon and Chris Klein mourning Jessica Campbell who died on 12/29..They didn't report it till 1/13 though.

This stood out to me though because I recently blogged about Reese Witherspoon on 12/29 about the pointless story of her being Flummoxed...I also mentioned how it was connected to the Nashville RV bomb and 9/11 in that post.

I also remembered I had synchronicity with my Drummer a few months back and it involved Chris Klein.. I even mentioned the film. "Election" in that post...I have never watched the movie though and I just looked it up to see its set in Omaha. I live in the Omaha metro area and my band is from Omaha so that sticks out to me...
Plus I had that synchronicity on 9/11...I made the post on 9/12...it also involved the Umbrella theme...
Remember my drummer is important to the Sleep Paralysis sync from last night too.
Election=38
Omaha=38
38th president Gerald Ford was born in Omaha.
Jessica Campbell died age 38.
She died 56 days after the election on 12/29..the 201st prime.
The election was on 11/3.
The film came out on the 113th day of 1999.
This is why the reported her dead on 1/13.
Chris Klein is also from Omaha.

Further connecting it to Omaha...She died 75 days before Chris Kleins bday and they reported her death 75 days after her bday.
Omaha=75(FB)

She also died 83 days before Reese Witherspoon bday on 3/22.
Reese Witherspoon=83 and 218
Election=38 and 83
Think how I just wrote about 2/18 being important to my 38th bday too..
Also, think about 322..Skull and Bones..George Bush...He came to Offutt Air Force base after the planes supposedly hit the Twin Towers...
Chris Klein=322(FB)
Recall I saw  UFO the night before 9/11/2001 on my way back to Council Bluffs(Basically suburb of Omaha)
Matthew Broderick is the other star in Election and he was born on the 80th day 21/3.
Omaha Nebraska=80
Omaha=213(Satanic)
Further, 9/11 is a span of 161 days before 2/18..
Omaha, Nebraska=161(FB)
Maybe need to pay attention to Omaha with the 218 stuff.
It's funny too, because in 2001 when I lived in Council Bluffs we used to get stoned and watch Little Nicky a lot...also we watched Jeopardy everyday.
Also Dick Cheney and Bob Kerrey were both born in Lincoln, which isn't too far off from Omaha.

Posted by The Mindless Freaks(Dan Behrendt) at 12:40 AM