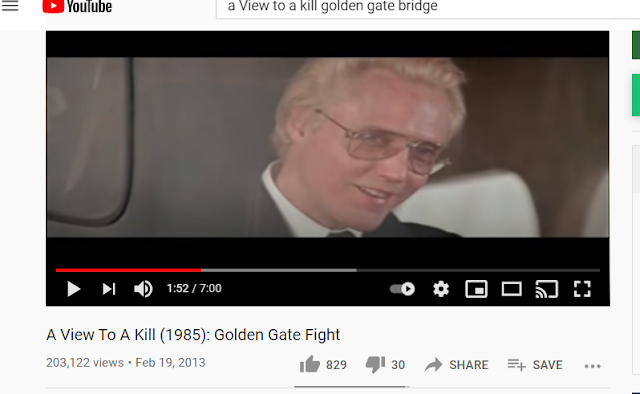 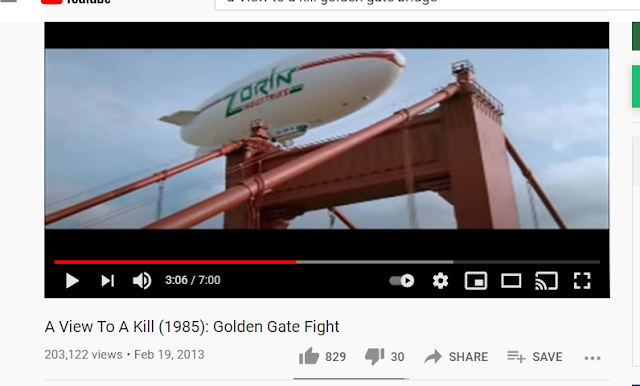 I saw this comment on Zach's video earlier....I had no idea the Bond film "A View to a Kill" has a fight scene on the Golden Gate Bridge....I've been saying that this Bond stuff/Iverson stuff is connected to Bridges.....
Golden Gate=45
Bridge=45
Golden Gate Bridge=81
Bond Girl=45
Tanya Roberts was reported dead a span of 81 days after her bday...
Pussy Galore died on 4/5.
So I'm watching  a clip of this Golden Gate Bridge scene and I see the bad guy is played by Christopher Walken....His character also has the name "Max"...this instantly makes me think of Batman, because Christopher Walken plays "Max Shreck" in Batman Returns....Also think about the connection to "Mad Max".
Mad Max=210(FB)
San Francisco California=210
Pussy Galore=210(FB)
Sean Connery died 210 days after Pussy Galore..
Tanya Roberts=210(FB)
MF Doom=210(English Extended)
Moon=210(English Extended)
San Francisco is named after Francis of Assisi just like Pope Francis....The Golden Gate Bridge will be opened for 84 years on 5/27/2021...
Jesuit=84
Francis is 84 years old..
Francis left Philadelphia on the Jesuit anniversary on the night of the 4th blood moon of the Tetrad...
Recall, Lindsay Lohan wears a shirt in "Herbie" with a blood moon and the Golden Gate Bridge..Her dad in the film is Michael Keaton who is also "Batman".
blood moon=210(FB)
The fight scene in the Bond film with the Blimp also reminds me of the film "Black Sunday" where the blimp is set to destroy the Super Bowl...
2/10 is the 41st day...
Super Bowl=41
Black Sunday came out 4/1.
Tomorrow 1/5 is the day Golden Gate Bridge Construction began.
Posted by The Mindless Freaks(Dan Behrendt) at 12:06 AM