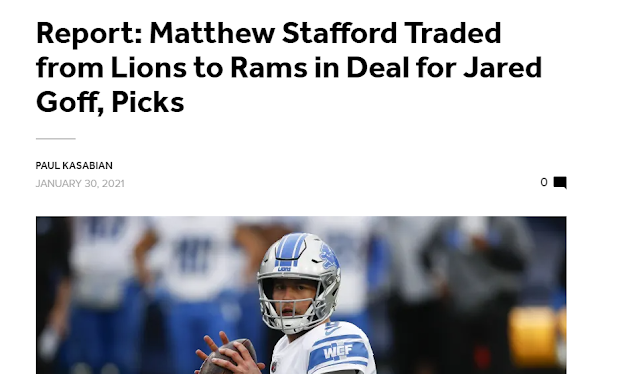 Jared Thomas Goff=257
The 55th prime number is 257.
He was traded 257 days before his bday.
Recall the Rams are important to the narrative with the Chiefs and Moses.
Also remember that after the Rams lost to the Patriots in SB 53 there was a major narrative with World Lion Day...The Ethiopian Air crash synced to Haile Selassie/Lion of the Tribe of Judah/Jesus....This is why Nipsey Hussle died in Los Angeles as his name is Ethiopian and this is where the Ark of the Covenant is supposedly held....So it's interesting this trade involves the LIONS.
Matthew Stafford=179 and 62
Buccaneers=179 and 62
Tampa Bay Buccaneers=62
Remember that Christian Bale(Batman/Antioch) also portrays as Moses....we are currently in the year 2013 according to the Ethiopian Calendar that begins on 9/11. The 2013 Super Bowl was after the Batman shooting synced to the Ravens...also the Blackout Bowl.

Posted by The Mindless Freaks(Dan Behrendt) at 9:13 PM