I'm also thinking about his name "HAMza" reminding me of the Pig year....plus Osama bin Laden super connected to 310 and 8/11...

Posted by The Mindless Freaks(Dan Behrendt) at 11:18 PM No comments:

The Cook Brothers who survived the Vegas Shooting and Garlic Festival

What a joke haha. These brothers survived the Las Vegas shooting and the Garlic Festival? Remember how the Vegas shooting was 666 days before the Garlic Festival Shooting...which is why I think all the Buffy stuff was important to PI....144 digits after the decimal in Pi sum to 666.
Also the Shooter Santino Legan supposedly bought his gun in Nevada of all places.
The biggest joke is the names of these people...
They now survived the GARLIC shooting....notice they have the last name COOK and they were with their friend Alicia OLIVE?

I saw this comment about the Garlic Festival being based off a small town in France as well which is perfect.

Posted by The Mindless Freaks(Dan Behrendt) at 9:28 PM No comments:

I see a Cubs-Indians narrative with this story of a Brawl and Yasiel Puig's possible trade to the Indians.
The reason it's so important is because the Reds and the Pirates played a major role in why I thought the Cubs would win in 2016. Remember the day of the Hoboken(first baseball game) train wreck in which they said 114 people were injured the Cubs tied the Pirates. It was the first "Tie"=114 since the Astros tied the Reds 114 days before the World Series in 2005. Also my Uncle Barney went to the Reds game on 8/8/2005 and then later died on 1/14 after the Cubs won getting their 114th win of the season in their 114th season being called the Cubs.
The Pirates were important because "Pittsburgh Pirates"=228 and Aroldis Chapman was born on 2/28 which was the exact day Harvey Kuenn died. Harvey and Rocky Colavito cursed the Indians.
Terry Francona became 11-4 coaching the World series in 2016...His father Tito played with Rocky Colavito on the Indians and also tied Colavito for 2nd place in Rookie of the Year voting and more...Tito's bday was 11/4.

Notice how the Reds lost 11-4 to the Pirates in the game tonight as well. Plus the Indians played the Astros haha.
Yasiel Puig Valdes=92
Astros=92
Cincinnati Reds=92
Remember Hurricane HARVEY...Harvey Kuenn and so on..
The Astros got their 69th win in their 108th game of the season.
World Series=69....108 the biggest number with the Cubs in 2016.

Yasiel Puig's bday on 12/7 is also fitting as this was the big number I talked about with the Indians in 2016.
127 people being arrested at the Pipeline..
North Dakota=127 and had it's 127th anniversary being a state on Game 7 of the World Series.
127 Cleveland Indians-Cubs 2016
Read the above post as I don't want to retype it all. I do want to mention how it was connected to Michael Jordan and the MLB Strike though...Angels in the Outfield and so on connected to that this year..plus 8/11 being important to it.

He was traded to the Indians for # 47 Trevor Bauer today and it's perfect...Today is 4 months 7 days before Puig's bday and the 211th day of the year.
47th prime is 211.
The Pirates beat the Reds today getting their 47th win of the season as well.

Of course this brawl stems back to another one that happened on 4/7 this year...Notice it was 114 days ago haha. You can't script it any better. 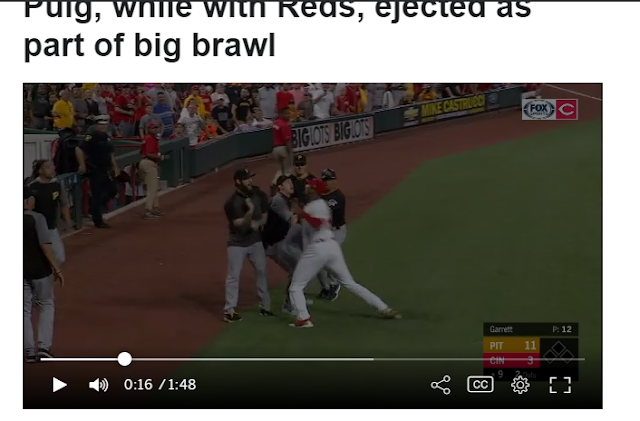 The brawl also began when the score was 11 to 3 which reminds me of the 113th World Series.
Interesting the video is 1:48...
Cleveland Indians=148
Curse of Rocky Colavito=113
Remember too that Trevor Bauer was important to the "Finger" symbolism that was connected to 810 and Rocky Colavito as well.

Posted by The Mindless Freaks(Dan Behrendt) at 12:58 AM No comments: 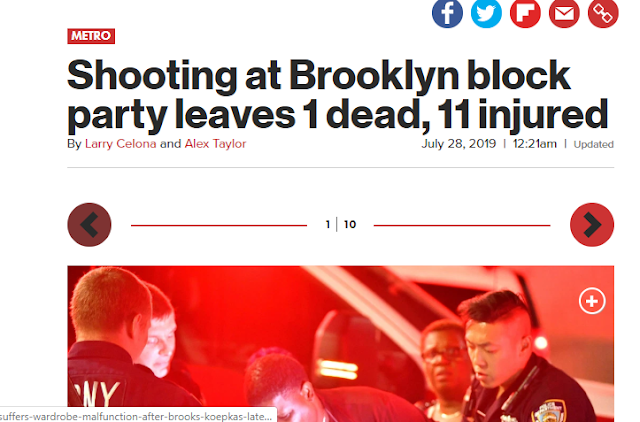 I just watched one of Zach's videos about the Garlic shooting and he mentions the day before a shooting in Brooklyn.
Right away again it reminds me of Vampires...Remember how I've said I think there is something important to the film "A Vampire in Brooklyn" with Eddie Murphy... 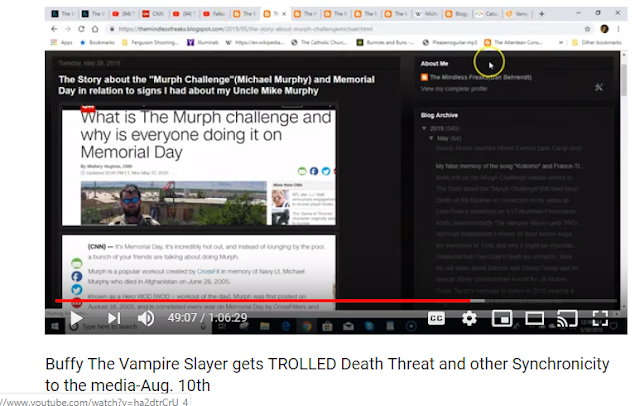 I talk about it at this point in a Buffy Video. I just mentioned the film because I was having syncs with my Uncles and it was written by Wes Craven who was important to the Slipknot stuff. I never did finish watching the film again either.

Interesting in the post where I talk about my Uncle Eddie Murphy again I brought up Nipsey Hussle and Nipsey Russle being the "Tin Man".
In this Garlic Shooting the band that was playing during the shooting was called "Tin Man" too. 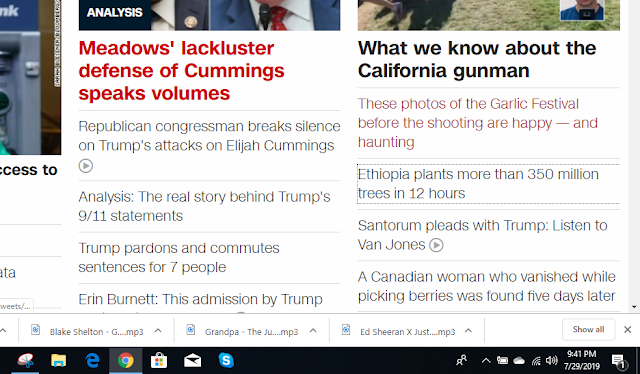 As I'm writing up this post I see we are getting a story about ETHIOPIA as well.

I'll look more at this post, but I have to stop at the moment and not sure when I'll be back. I'm just going to post it for now.
Posted by The Mindless Freaks(Dan Behrendt) at 10:00 PM 2 comments:

This Gilroy shooting is heavily themed on Red Hair...Notice Gilroy means "Red Haired Servant"...also the shooter said in instagram to read "Might is Right" which was written by Ragnar Redbeard(Psuedonym)...it's believed the actual author was Arthur Desmond who had red hair and a red beard....
Oddly enough today at work I made a joke about me being a ginger as well..I then talked about how my hair isn't as red as it was when I was a kid...the joke was about Ginger's having Souls as I snapchatted a picture of me with the beer called "Sol" saying it's proof that Gingers do indeed have Sol's a few days ago. 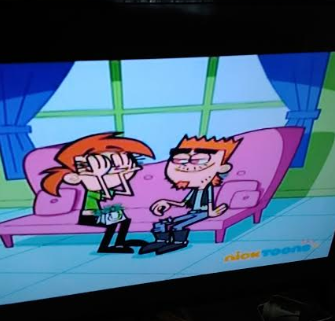 Of course while writing this up I just looked at the TV and saw this haha. It's a show called "The Fairly Odd Parent's". I've seen it on before, but no idea what it's about or payed much attention to it.

All of this Ginger stuff reminds me of how August 10th and 11th are important to the "Ginger Cow" and the prophecy of the 3rd temple.
It's also funny thinking about Ginger's being easily sunburned in regards to Vampires...
I posted a while back about Hagar and red hair too....plus makes me think of Prince Harry who has red hair.

Santino William Legan=210
This number has been important to August 10th..
Kamala Harris bday is 2 months 10 days after 8/10.
San Francisco California=210
They took down the Gematrinator 210 days before 8/10.

I started this post when I got off work earlier, but had to quit for a bit. In the mix of stopping I got this message on my phone about SOL. I possibly talked about that in this video, but still interesting timing to get a notification.
I've had number of good posts from this person and also a few syncs because of them as well..so just sticks out to me..
The name has interested me as well because in Roman Numerals MDLI is 1551. This number is important to Trump/Obama...Queen Elizabeth/Victoria...Pope Francis...Kanye West
Remember how Aurora was important to Trump/Batman as well....Aurora is a Red Haired Goddess.

Of course I re-look up Aurora and see her sibling is "SOL" haha.
Now I'm wondering about Christmas/Jesus/Sun/Soltice...
This Garlic Shooting happened at "Christmas Hill Park"...

Posted by The Mindless Freaks(Dan Behrendt) at 9:31 PM No comments:

A shooting at the GARLIC Festival? Instantly this just reminds me of Buffy and the Vampire Theme.
Interesting another headline story is about the "PINK Lady Bandit" too. My original post about Buffy on 11/22/2018 even involved "Pink".
David Arquette born the same day as "Pink(singer)".
Kristy Swanson in "Pretty in PINK".

Interesting the name "Gilroy" is a Scottish name and means "Kings Servant" as well. 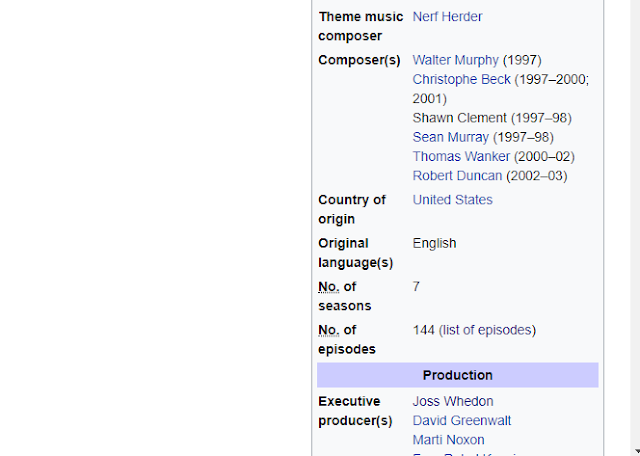 The TV Show also aired 144 episodes.
Thinking about it now and possibly I mentioned this before, but the recent Angel theme is interesting with the Buffy stuff too. Remember Angel the character on Buffy and the Spinoff of Buffy called "Angel".

I wonder if I need to check out the show "Firefly" as that was why Buffy was important to that show.

Also I mentioned the Marilyn Manson concert being important to "Slayer"...now I'm wondering if it was just all about Buffy who is a "Slayer"? 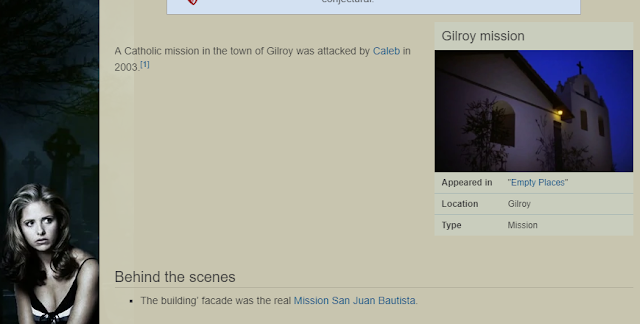 There is an episode of Buffy the TV show that the setting has ties to Gilroy as well....
It's season 7 episode 19...which reminds me of Lothos(Ruetger) dying on 7/19.
The bad guy on the show at this place is Caleb who is a Preacher character....I've documented a ton about Father/Priest stuff over the years..so possibly something important to that.

Slipknot is also important in this narrative and for whatever the reason I keep thinking about "Garlic Knots" and Slipknot currently playing "Knotfest"...
Their song Unsainted released on 5/16.. 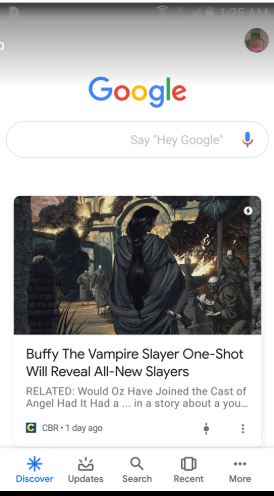 While writing this I text Sam and he went to Google and this was the first story that popped up haha.
They released an all new comic series of Buffy from a company called "BOOM". Interesting...

Posted by The Mindless Freaks(Dan Behrendt) at 2:23 AM No comments: 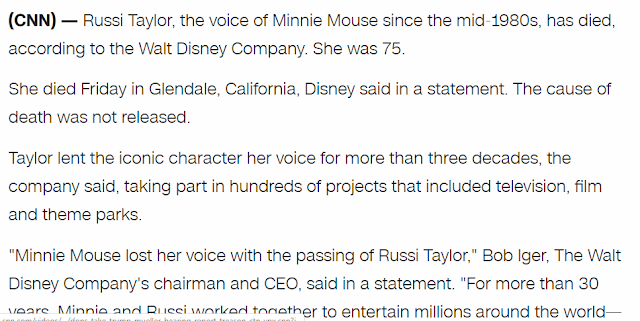 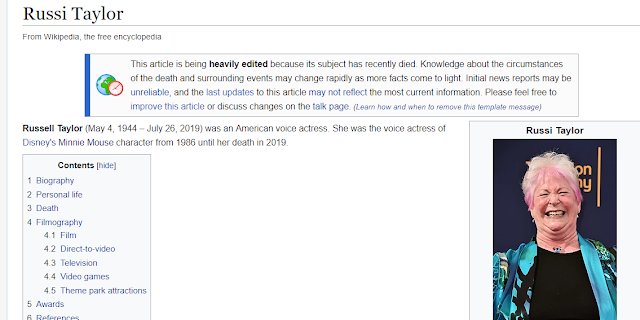 She died 9 months 8 days before her bday.
Minnie=98
She must've had mean parents to name her "Russell" too.

Her bday of 5/4 makes me think of baseball as well.
Interesting the Angels who were once owned by Disney stated on 54 wins the same day she died..
Baseball=54=MLB and so on..
3 to 9 score reminds me of New York...but 75 reminds me of the Astros.. 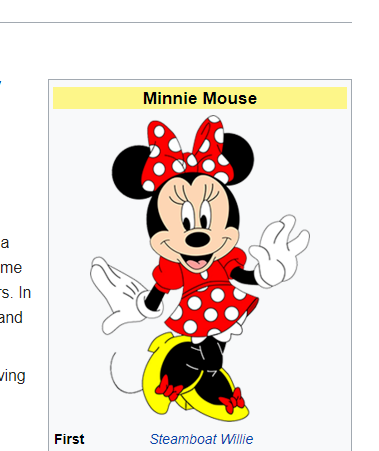 Possibly nothing thinking about JoJo Siwa and her signature hair bow..it's interesting Minnie Mouse also has a big bow in her hair. I know it's not Disney, but there is something going on with Nickelodeon and Disney lately..
Russi was the voice in 86'....I'm going to that concert on 8/6...The 86 World Series was the Bill Bucker error...The 86th World Series was the earthquake series...Rocky Colavito will be 86 years old...A bunch of stuff I've documented since last year..
Disney=86
Nickelodeon=107=Earthquake

Since this is so random might as well type my thoughts..
Nickel...like 5 cents...

Posted by The Mindless Freaks(Dan Behrendt) at 12:47 AM No comments: 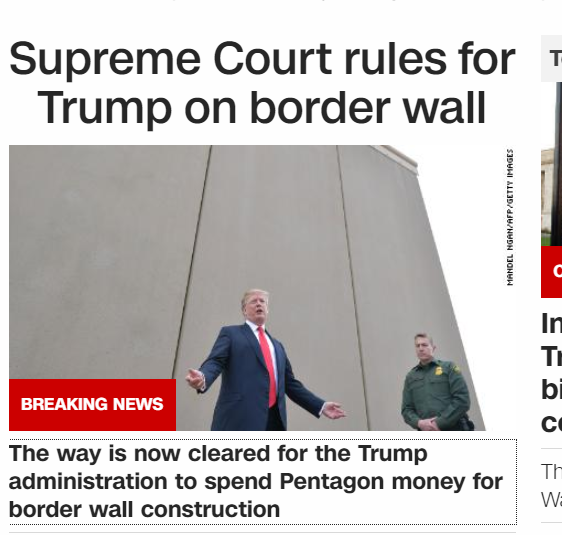 The Supreme Court rules for Trump's border Wall and they will use 2.5 billion dollars?
Remember when Trump addressed the nation about building the wall, it was during the time of the government shutdown that had to do with the wall.
Then on the 25th day and Trump's 2nd year 5th day as president the shutdown stopped.
Pope Francis also called out Trump about the wall on this day as well.
Pope=25
Trump=25
Pence=25
All of this delayed the State of the Union speech to 2/5 which is 2018 was the exact halfway point of the Berlin Wall being down as long as it was up. This was just after Super Bowl 52...
That speech was all about the reflection of 25...52.
Nancy Pelosi=52
Invitation=52
She was the 52nd speaker of the house..
President=52
White House=52
Government=52

I wonder too if it comes today late in the night as it would be the anniversary of the Korean War in Korea right now..

Posted by The Mindless Freaks(Dan Behrendt) at 12:14 AM No comments: