So earlier tonight before I took my girlfriends brother to work I messaged Bobby back about his Blog post involving Rain he sent to me. On the way to taking him to work I was thinking about all of the recent events and how it's synced to the YouTube Truth Community...

I was thinking how Bobby was connected to the RV Bombing in Nashville...then the next day we find out the Jeff C died and Mary Tofflemire messaged me....Recall Zach's car crash was on Christmas Eve 2016, so right around this same time..then my Uncle died on 1/14 after a car wreck on 1/13/2017. I then started getting messages from Veritas 77 Axiom out of nowhere..I then have the sync with Richard Quinn and recall I talked about him before the RV bombing with Anthony QUINN Warner....Then later that day I see Zach out of nowhere makes a video with RV Truth who has pretty much been his enemy forever.....He even made videos saying Zach's car crash into his house was fake and so on....Anthony Quinn Warner even looks similar to Roddy Piper who RV Truth uses as his logo, and RV Truth's new channel was synced to the RV bombing.

Also, recall that Zach's car crash was synced to him starting all4truth with the Umbrella logo and then got threatened by the Umbrella Man to watch out for Christmas Eve. Not too long ago Zach caused the drama on Derek's interview with Jason Goodman....in Zach's video about the ordeal he says that Bobby Simpson is responsible for taking down all4truth.

Also don't forget that all4truth launched around the same time as Zach's car crash and the video with him having a debate with Jeff C and ACFAU...Now we find out Jeff C dies the day after Christmas....Veritas77Axiom like ACFAU, and talks crap on Gematria.... 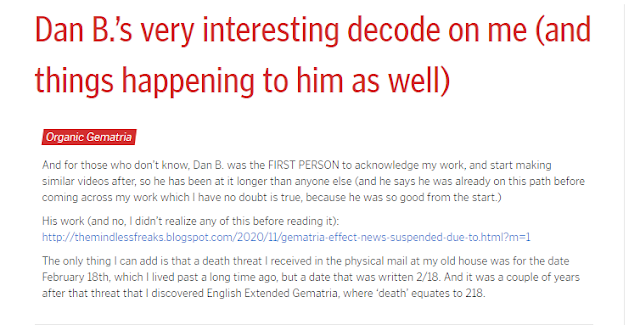 Zach said he got a death threat in the mail for the date 2/18.
English Extended the word "Death"=218
When Zach's car crash happened it was 186 days before his channel was deleted on 6/28/2017, which was Elon Musk's bday.
Elon Reeve Musk=186
SpaceX=186(FB)
6/28 leaves 186 days in the year.
Elon Musk=218(FB)
Zach Hubbard=186(FB)
After his channel was deleted Zach did 1 more episode of the Gematria Effect on the 186th day of 2017 and then took a 2 week break.
The original Umbrella Man was Louie Witt.
Louie Witt=186(FB)
Louie Steven Witt=186
Think about Elon Musk/Space...
Zach was born on the anniversary of Neil Armstrong stepping on the Moon.
Neil Armstrong=186
Apollo Eleven=186(FB)
Zach also made a random blog post about Darren Daulton's book "If They Only Knew" on 4/15/2017. Darren Daulton then died on 8/6/2017, which was the 218th day of the year.
If They Only Knew=186 and 192
Darren Daulton died 113 days after Zach's post and his name gematria synced to the Houston Astros who won the 113th World Series that year. The world series began on 10/24, which is the same day Zach made his first blog post. The date 10/24 is also 192 days after Zach's blog post about Darren Daulton. The next day baseball coach Don Baylor died and his final bday was 6/28/2017.
10/24 is also a day important to conspiracy theory because Richard Hofstadter was born on 8/6 and died on 10/24. He coined the term "Conspiracy Theory".
Conspiracy Theory=218
Hofstadter died 2 months 18 days after his bday on 8/6.
8/6 is the 218th day.
This is why in 2018 they kicked Alex Jones off social media on 8/6.
The Flintstones=186 (Important to my Uncle)
Terry Kniess=186(FB)
Terry Kniess is the Price is Right Guy who reached out to me in connection the Vegas shooting. This was right after my Grandma died and I found out she was from Flintstone, Georgia and not Chattanooga...then Ralphie May died in Las Vegas and he's from Chattanooga...plus the Flintstones movie with King Ralph(John Goodman) and the 2nd film was set in Las Vegas.
Anyway, this is why Zach's channel got suspened in November 2020 over an Elon Musk video...It was 218 days before 6/28.
In 2019 Zach's Livestream got hacked and they gave him a strike that lasted until 6/28. This was intersting because I also got a strike from a music video I did that used a .gif file of "The Breakfast Club" that stars Molly Ringwald, who is also in Pretty in Pink....The Austin bomber had Pink Gloves, and the same day Alex Jones was taken off twitter we got a story about Pink the singer...Also a story about Goldberg the Goalie being arrested after I mentioned how he was synced to the Branson Duck boat drowing. The first duck boat drowning on the Aurora Bridge in 2015(Batman). Goldberg's last film was "Drillbit Taylor" which involves a pinky finger getting cut off...it was a John Hughes film, just like Pretty in Pink and The Breakfast Club....
John Hughes was born on 2/18 and died on 8/6...Molly Ringwald was born on 2/18.
Molly Ringwald=186(Pink/Breakfast Club)
Emilio Estevez=186(Duck/Breakfast Club)
Both of these actors were part of the Brat Pack, which got notoriety after the films "The Breakfast Club" and "St. Elmo's Fire"...St. Elmo's fire came out on 6/28 and the Breakfast Club came out on 2/15(The same day I got a Strike because of the film).
2/15/19 was also around the time Jussie Smollett(Ducks) was in the news and a shooting in Aurora, Illinois.
Now think about Goldberg the Goalie and Goldberg the wrestler who is going to be wrestling Drew McIntyre at the 34th Royal Rumble too.
Think about Aurora, and the Batman shooting too...and how the RV Bomb was synced to the Batman shooting. Joel Schumacher was important to the Brat Pack along with John Hughes and Joel also created the Batman where Jim Carrey uses Gematria.....the pink theme originally began because of Alex Jones and me watching the film "The Number 23" with Jim Carrey.

So after I dropped my girlfriend's brother off tonight I turned on the Gematria Effect on my phone. Right as I turned on the show Zach goes out to a caller from McMinnville, Tennessee..He says I think it's a first time caller, but I started laughing because I thought it was Bobby Simpson because he lives in McMinnville. When the caller comes on, it just some guy mumbling something like "Fuck that Fuck" and then Zach goes on the next caller. 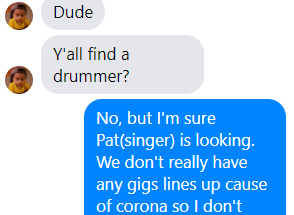 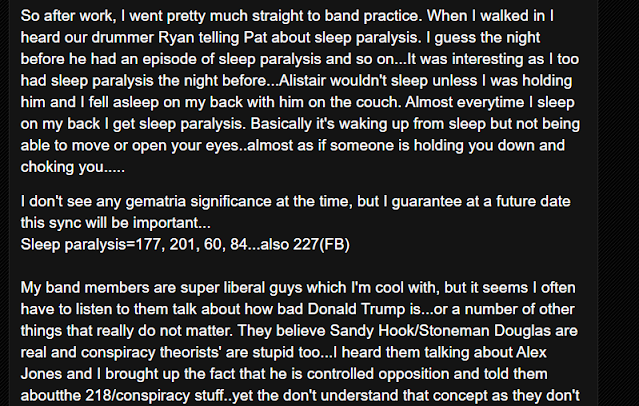 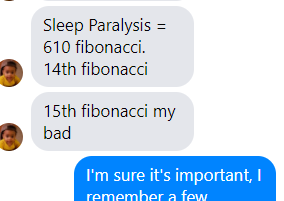 A few callers later some guy calls in from Canton, Ohio and talks about Sleep Paralysis...This stands out because not too long ago Bobby was telling me he had sleep paralysis...He told me because I have a blog post from 2019 where I had sycnhronicity with sleep paralysis with my bands drummer....Oddly enough, our drummer recently quit the band and moved to Illinois so we don't have a drummer anymore....
Ryan De LaGarza=218(Drummer)
Patrick Conrad=218(Singer)
Today(1/13) is even 218 days after Bobby's bday.
What's crazy to me is that 2/18 is 3 months 8 days after my 38th bday. Recall, how I am synced to Martin Luther as well who died on 2/18..I share a bday with Martin Luther...I'm gonna be super careful on that day for sure. I also find this date curious because I seen some people saying they think Jeff C had an aneurysm....2/18 is Dr. Dre's bday and he just had the brain aneurysm...
It could also just be a super important day with this knowledge and conspiracy theory for me...a major breakthrough..or the day my cousin finally finishes editing the book...maybe this is the Earthquake/Bridge...who knows, but it's important.

Would you believe that 2/18 is 6 months 28 days after Zach's bday too...
Seattle Washington=212
COVID=212(FB)
Covid Nineteen=212
Chrismas Eve is also a span of 6 months 28 days before Zach's bday...meaning that car crash was synced even further to 6/28.
Think about Martin Luther and Zach in light of the Jesuits too.
Donald Trump and the presidential Alert at 2:18 too...it was in 2018, the same year of the Austin bomber/Pink stuff.
There seems to be a big event for 2/18 if I had to guess.

Posted by The Mindless Freaks(Dan Behrendt) at 2:17 AM