First off, the picture above comes from her Go Fund Me Account. Notice how there is a heart with the word EVOL in it....which is backwards LOVE...think about that in regards to Valentines Day.
She dies on the 17th day of March age 19...
Think about it...the 17 victims and countless other 17 that went along with this story.
Dying age 19 is important because the 19th prime number is 67.
Valentines=49, 67
She had Survivors Guilt from the death of her friend "Meadow Pollack"=67
Nikolas Cruz=67
He was the 19 year old shooter.
Born 19 weeks after Majory Stoneman Douglas died 1 month and 7 days after her bday.

She kills herself 6 months 7 days before Nikolas Cruz's bday as well.

Meadows father born on the 49th day of the year too.

The date of March 17th also sticks out to me in regards to how XXXTentacion was connected with his album "17" coming out 173 days before the shooting.
XXXTentacion=173
March 17th...17/3...

This story comes just days after we get the school shooting in Brazil=612=Valentine....Stoneman Douglas 612 days after the Pulse Nightclub shooting.....Remember how we got the story of Trump banning the Boeings on the same day as the Brazil shooting and the original name of Air Force One was Columbine II. "Columbine High School"=612.....Marilyn Manson was synced up like crazy to Stoneman Douglas and he was partially blamed for Columbine and even said it ruined his career. He said this in an article that came out on Nikolas Cruz's bday(9/24) He wrote the album Holy Wood in response to the accusations...That album has a song called "Valentines Day". Manson from the area near Stoneman Douglas...he got injured by the Giant Gun Prop and then came back on 11/5 and used a Gun on stage and a Gun Microphone.

I even blogged about how Marilyn Manson was connected to Stoneman Douglas in my post about the Brazil Shooting haha...now a story of Stoneman Douglas.
Remember Manson has the video about the JFK assassination and JFK died at PARKLAND Hospital.

It's funny too as I just got this strange comment on my Manson/Asia Argento video the other day just saying "HI"? Notice the 1 Eye..
Ha and this is one of the 210's I was talking about.
Zaeda Sterling=210
Zaeda=811(eng ext)
I checked it on my phone at work which is why I forgot about it.
Looking at their channel however, it seems they are just foreign. I tried watching some of their videos but they are all in a different language...The first video is about Peru... 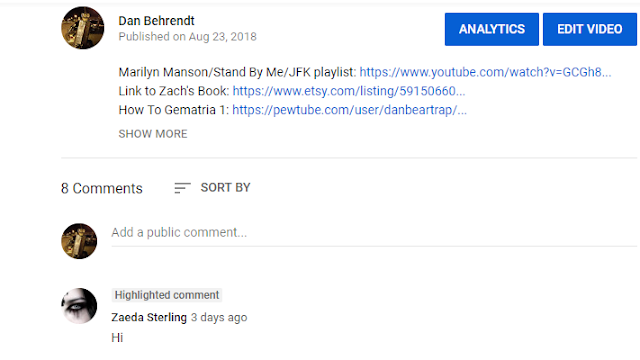 It sure does make ya wonder however that their name equals 210 and they comment "Hi" on a video I put out 210 days before.
Asia Argento Marilyn Manson Blog Post In that video/post a big thing I was talking about was the film that Asia Argento and Jimmy Bennett were in...Notice this film came out on March 10th...310 in the US.
Remember Asia Argento supposedly sexually abused Bennett and in this film Marilyn Manson has sex with Bennett's character as a little boy.

Today we also got the death of a 2nd Stoneman Douglas person, but they haven't released the name yet.
Interesting it's 17 and now 2 more from Suicide?...like 19?

Posted by The Mindless Freaks(Dan Behrendt) at 11:41 PM