So the Amberly girl died 1 month 3 days before her bday.
Alabama=13 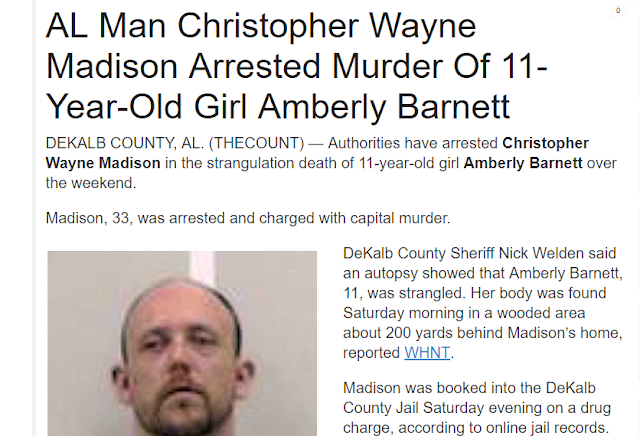 The Killer is supposedly 33 year old Christopher WAYNE Madison.
This story went to the mainstream on 3/3.
Thirty Three=156, 60
Amberly Alexis Barnett=156
Chris Madison=60
She went missing on the 60th day of 2019.

No doubt there is something important to John WAYNE.

As much as I've mentioned 2/15 and the connection to Chris Farley too....the name just sticks out to me considering Chris Farley was from Madison, Wisconsin. Farley also in WAYNE'S World. Think about that film in regards to Bohemian Rhapsody and how it's interrelated into what I have mentioned.
Even more so because Wayne's World on SNL and the movie is a underground TV show that is based out of AURORA, Illinois.

Wayne's World even does a spoof of SCOOBY DOO at the end of the film.

Mike Myers also in the film Bohemian Rhapsody...
It sounds crazy but I wonder if The Prodigy Guy dying named "Keith Flint" is important to this. Think about Water...Flint, Michigan....Remember how I have recently documented about the Pink symbolism with Halloween H20 and Michael Myers with Mike Myers. I mentioned the Pink Moon in that post....remember Prince died on the night of the PINK Moon which was also the QUEEN's bday. They colored Niagara Falls Purple(Water)...

Also in regards to the Pink Moon, Derek blogged about Amberly's death being connected to Eclipses.
Eclipse=33, 120
Christopher Wayne Madison=120
Remember the Wolf Moon on 1/20 and much more in connection to 120.
Posted by The Mindless Freaks(Dan Behrendt) at 11:22 PM