Synchronicity with old posts in connections to my First Customer on 3/19 and their Total being $8.10-Golden Gate-Gateway Arch 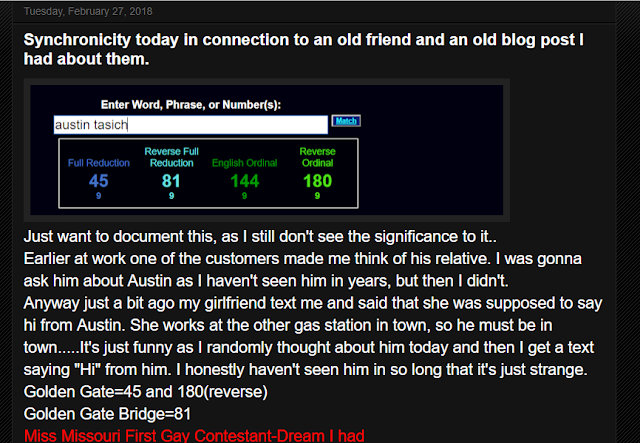 I forgot to document yesterday about some crazy synchronicity I had when I first got to work. A kid I haven't seen in years came into the store and was my first customer that I rang up. I didn't recognize him at first, but when he came to the counter I realized who it was.
Anyway I have documented about him on a few posts before as a few years ago I had a weird dream that involved him and he talked to my girlfriend the same day I was going to ask his relative about him.
I thought I had documented about him again on 1/15/19 but I can't seem to find the post. He was in a car wreck in which another kid I sort've knew had died. It explains why when I saw Austin on 3/19/19 he was using crutches and what not.

It's interesting because that guy died 63 days before this happened.
Cody Grandmont=63

Right when I recognized Austin the other day, I knew there was something significant in regards to the syncs I've had with him. Of course his total came to $8.10....if you notice In the picture above I showed how Austin was connected to the Golden Gate.
Golden Gate=180, 239(Jewish)
Golden Gate Bridge=81
Austin Tasich=81, 144, 180
Austin Lee Tasich=239

I figured I'd look and see how far away this happening was from 8/10 and it was 144 days. Just like what Austin's name equals.

It's also interesting to note that I did mention St. Louis and the GATEway Arch in previous post because I talked a lot about Missouri in the first post. I also noticed the first post I mentioned a lot in regards to Omaha.
Omaha, Nebraska=319(Jewish)

Posted by The Mindless Freaks(Dan Behrendt) at 12:49 AM