The RED WOLF MOON begins when Chiefs play Patriots-K.C. Wolf-Sea of RED-Trumps bday in relation to the Eclipse 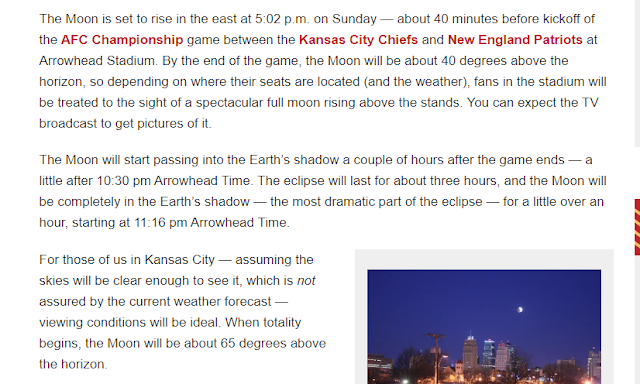 I can't believe I never thought of this until I saw someone post about it on Facebook. The Wolf/Blood/Red Moon will begin the same night the Chiefs play the Patriots....
Think about the Chiefs and the color red. They play in the Sea of Red. The stuff I have been mentioning most of the year with Rams/Chiefs narrative. Think how the Nebraska Cornhuskers were important to the Wolf narrative with this as well. Although Tom Brady was synced up to the Wolf Narrative as well....
Arrowhead=51=Moon

If the Chiefs or especially the Rams makes the Super Bowl this year, I expect the major earthquake I have been talking about since 2015 to happen this year. Or a news story that Shakes the Earth such as the death of Queen Eliz/Pope/Obama. The whole narrative is about the Civil War/Exodus theme that has been ongoing.

Don't forget Trump won the election in connection to the closest Super Moon since 1948 as well. It was the biggest election upset since Harry S. Truman in 1948 too. Truman died in Kansas City and the only president to die age 88.
Trump=88
Kansas City=148(reverse)
Harry S. Truman=148(reverse)
Donald J. Trump=148
Chiefs established on 14/8 by Lamar Hunt....just thinking how Truman was born in Lamar, Missouri.

Truman also recognized Israel 11 minutes after they declared Independence in 48'. Remember the Jews identify with the Moon.
Jews=51=Moon

Remember too how there was an earthquake before Moses spoke to God on Mt. Sinai. I recall watching something with Jordan Maxwell too saying that Mount Sinai is actually the Mountain of the Moon God. It's why the Jews start their holy days at sunset and more.
The Months in the Hebrew Calendar also go by the Moon.

Also interesting the Super Bowl is on the 34th day of the year. A lot of what I was talking about with Moses had to do with 34 and 43. I know Arrowhead is in KC, Missouri but still interesting that Kansas is the 34th state and the other stuff I listed above.


I also documented about Johnny Tsunami and a memory I had of my cousin....thinking about that right now...my cousin is from Kansas City.

Posted by The Mindless Freaks(Dan Behrendt) at 10:02 PM