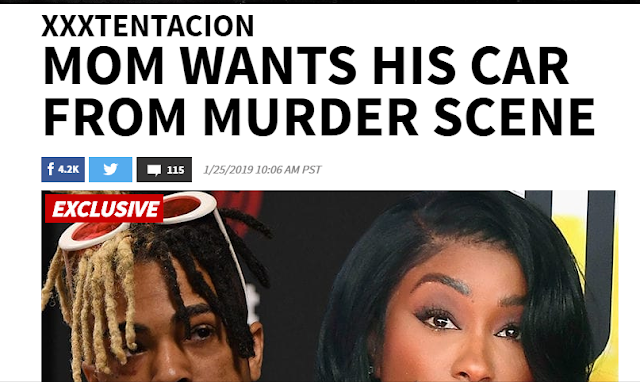 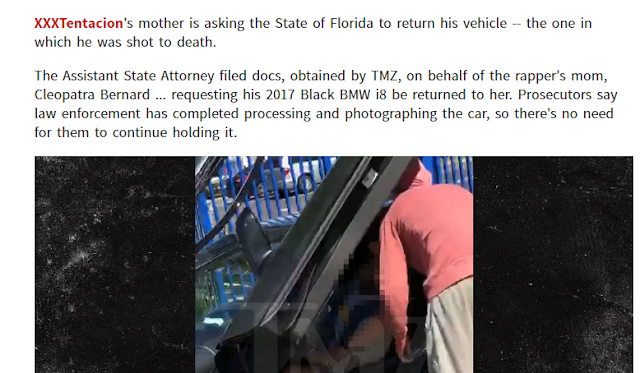 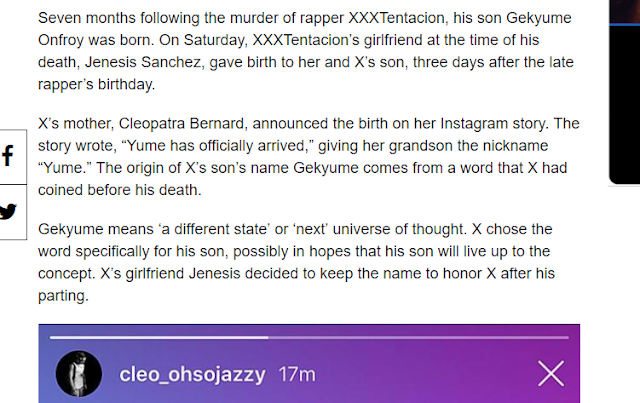 Recently we have got a bunch of stories that are involved with XXXTentacion.
We got his mother wanting to get his Black BMW back. Also the birth of his son on 1/26 and a story of Trippie Redd avoiding jail time over an Atlanta fight.

His son's name is "Gekyume Onfroy"=180
Son=180(Jewish)
Jahseh Onfroy=180
Notice in the article above the even highlight what the name Gekyume means.
A Different State=63
Next=63
X=6 and 3(rev red(
Jahseh Onfroy=63

XXX released his album titled "17" exactly 173 days before the Stoneman Douglas shooting(near where he lived).
XXXTentacion=173, 151.
Valentines Day=151
The Album "17" also released 151 days after his bday.
Stoneman Douglas was all about "17"....17 people killed, 17 people injured. 17 year old David Hogg. They boycotted school for 17 minutes. Then 17 year old Joaquin Oliver buried in the Dwayne Wade jersey on the 17th of February. Wade born on the 17th day of the year. Marjory Stoneman Douglas died 1 month 7 days after her bday age 108.
Anthony Rizzo of the Cubs went to school at Stoneman Douglas. Remember the Cubs broke the 108 year curse and more.. The Cubs opened the season against Miami and in the 2nd game they did a tribute game to Stoneman Douglas. 17 seconds of silence and a 17 year old throwing the first pitch. The game was scoreless until # 17 Kris Bryant hit a HR. It went 17 innings and then won because Miguel Rojas hit a HR 1 month 7 days after his bday.

Notice X's mother nicknamed his son "Yume"=17
Also he said Drake was going to Sacrifice him and that beef started because of the song "KMT"=17 that Drake performed 17 days before Valentines in 2017.

The reason we are getting the Trippie Redd story on 1/28 is because the original beef with Drake happened on 1/28. Then later XXXtentacion got mad at Trippie Redd for being on Drake's song "God's Plan".
God's Plan=128

His mixtape before the album "17" was called Revenge and it had a track titled "Valentines" on it too.
Revenge=40
His cousin was murdered 1 month 7 days after he released "Revenge".

XXXTentacion also died on Trippie Redd's 19th birthday.
19th prime number is 67.
Nikolas Cruz=67
He was 19 years old and born exactly 19 weeks after Marjory Stoneman Douglas died.
Stoneman Douglas happened 6 months 7 days after Cubs Anthony Rizzo's bday and 67 weeks after the Cubs won the World Series against the "Cleveland Indians"=67
Think about Chicago and the Valentines Day Massacre/Chester Bennington dying and the Vday Massacre being in Lincoln Park.
Eastern Orthodox Valentines is on 6/7.

Trippie Redd=173
XXXTentacion=173
His first posthumous song was titled "Ghostbusters" with Trippie Redd.
Ghostbusters=173
After X died his cousin supposedly drowned in a pool in Jamaica on the day leaving 173 days in the year.
I mentioned how Bill Murray was important to 67 and Valentines because on Ghostbusters II the lady tells him that's when the world will end and so on...

Notice his final album called "Skins" was released 173 days after he died as well.

There's also a riddle with Trippie Redd's fight being in Atlanta. We get this news just before the Super Bowl in Atlanta. Remember the Drowning symbolism was important with XXX as his cousin supposedly drown in the pool just before the Duck Boat Drowning and so on...I also mentioned how there was a Father Son connection which is interesting.
Remember how XXXTentacion died on the anniversary of the War of 1812 beginning too.
The reason I know it's important to Atlanta is because of Drake and Kanye West. Drake a Male DUCK...
Kanye born in Atlanta....they just had beef in December...
The Beef was 1 month 20 days after Drake's bday.
Kanye West=120
Drake=120
Aubrey Graham=120
Atlanta=120
Atlantis=120
Illuminati=120
The Atlanta Olympic bombing happened at 1:20am.

I'm pretty sure it's also why we got the death of Wood Harris famous for Remember the Titans....The Atlanta Olympics...The Olympians defeated the Titans. The Rams beat the Titans to win Super Bowl 34 too. If you look up Wood Harris he is also in the show "The Wire" with Michael B. Jordan who is Adonis Creed in the film Creed. Drakes child is named Adonis.

We also just had the boxer named Adonis Stevenson lose and get injured severely. They just came out and told us that he is able to walk again. He got knocked out by a Ukraine boxer. The coat of arms for Ukraine is the Trident.
Think about all of this in regards to Valentines...
Adonis in mythology was the lover of Aphrodite(Goddess of Love). Also think about how I have mentioned a ton about Philadelphia the city of Brotherly Love. Remember Roddy Piper saw the ghost of Adrian Adonis. Rocky's wife Adrian...Creeds son Adonis. Adonis Creed played by Michael B. Jordan....Philadelphia the capital of the country Jordan and then later destroyed by earthquakes...

Also the recent arrest of Chris Brown in Paris is important because Kanye is important to Paris. Plus Chris Brown had a feud with Drake over Rihanna. Remember Tony Parker the French Basketball player was injured in that too. Parker now plays for Michael Jordan's Charlotte Hornets..Rihanna was important to Super Bowl 48 in regards to Water..She's from Barbados which has the Trident for a Flag. Also the Diamonds in the Sky song is a reference to Neptune/Horses. Drake's son is with a girl from France.
Think about French supposedly being the language of Love...Pepe Lepew.
This year is really important to France with the 227th anniversary of the Fall of French Monarchy coming on August 10th(Tisha Bav).

Posted by The Mindless Freaks(Dan Behrendt) at 12:13 AM