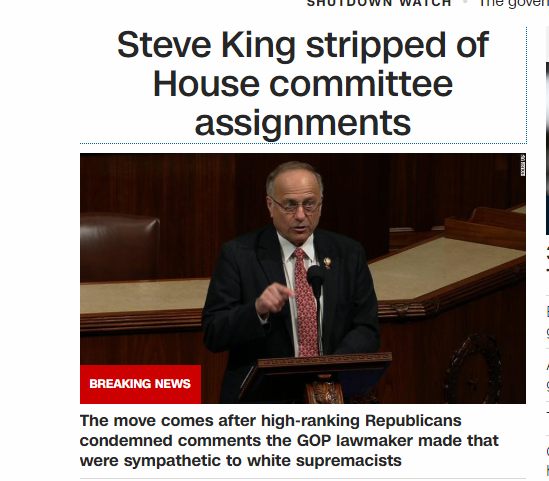 I have been saying for a long time how Steve King is connected in the coding to Prince Charles/King Charles. This story comes 134 days before his bday.
King Charles III=134

Remember he went to High School in Denison, Iowa in which the Mascot is the Monarchs. Steve KING. Funny too in regards to racism as that town has a very high hispanic population now.
This story coming on 1/14 also sticks out as that's a number I have mentioned with the Steve King stuff too. Even Donna Reed(Denison Native) died on 1/14.
Storm Lake=114
Buena Vista=114
It was all synced up to the boy ate by the alligator at Disney Land connected to the Battle of the Buena Vista in the Mexican American War. The boy was ate on Trump's bday and Pope Francis' 1,189th day of being the Pope.

King also connected to Andrew Jackson in regards to the $20 bill..Jackson connected to the War of 1812.
I'm just thinking about this story. A big thing in connection to the beginning of the NFL season was people talking about the Redskins. If you go back and look at my info on the Redskins it points to the Rams. The Steve King stuff was important to Brandon Scherff(Washington Redskin). Also in my post about the 72' Dolphins I mentioned another Denison guy who played for the Rams.

Posted by The Mindless Freaks(Dan Behrendt) at 9:06 PM