I was sitting here writing some stuff up on my notepad and Claire came over and saw the Gematria Calculator opened. She was like.."ooo can I type something in there" and I let her. I was trying to explain how Gematria works to her, but she wasn't quite understanding it. She then typed in Scoobe-Doo and I corrected her that it was "Scooby". I then explained that S was the 19th letter and C was the 3rd letter and so on...then you add them up. I said, "Does that make sense"? Right as I said that the TV said, "Makes Sense"..it was Fred on the above episode of Scooby Doo.
It's the 30th episode...
Claire=30
Makes Sense=30

Look at this though....
Thirty=310(satanic)
Remember I noticed the 310 stuff because of Sarah Michelle Gellar and Buffy the Vampire Slayer. Notice this episode of Scooby Doo is all about Vampires too. In the post about Buffy I mentioned Scooby Doo as well.

Buffy the Vampire Slay=310
Buffy Summers=310(rev Franc Baconis)
The TV Show premiered on 3/10.
Luke Perry died 3 months 10 days after my post.
Remember too Corey Haim died on 3/10.
Corey Feldman defended Michael Jackson the same day Perry died reminding us of The Lost Boys(vampires)...Neverland...Buffy...
I watched Lost Boys 2 and heard a whistle that was also in Claires favorite cartoon Troll Hunters...The guy who wrote the songs name was 310(Edvard Hagerup Grieg) and it was for a play(Peer Gynt) that came out on the day leaving 310 days in the year. The Story of Feldman came out in the media 3 months 10 days before Griegs bday.
There was so many 310's going on with these stories. It's interesting the Sarah Michelle Gellar story was around Thanksgiving and "Turkey"=310. There is a lot going on with the Country Turkey as well that's important to this.

I'm just thinking how last night I mentioned Merrick Garland too....In the Buffy Post I mention Donald Sutherland who plays Merrick....Donald's bday is 7/17 which is something I talked about last night too...both things I haven't really blogged about but mentioned in that video.
Merrick Garland=624(satanic)
Claire's bday is 7/30 which is 7/17 on the Julian Calendar too.

In regards to the Wizard of Oz and Nipsey Russle being the Tin Man in "The Wiz"....Michael Jackson was also in that film...plus the episode name above "How to Train Your Coward" reminds me of the Cowardly Lion.
Kansas is also the 34th state and joined 34 days before 3/4...The last state to join the Union before the Civil War.
Nipsey Russel's real name is "Julius"...Julian/Julius.
Courage=34(Cowardly Lion)
I probably need to watch "The Wiz" but I really don't want to haha. I tried a long time ago and just couldn't get into it.

Waynes World does the spoof of Scooby Doo(Aurora)
Also I almost forgot that Osama Bin Laden was born on 3/10.
Selassie=310....plane crash on 3/10...Lion 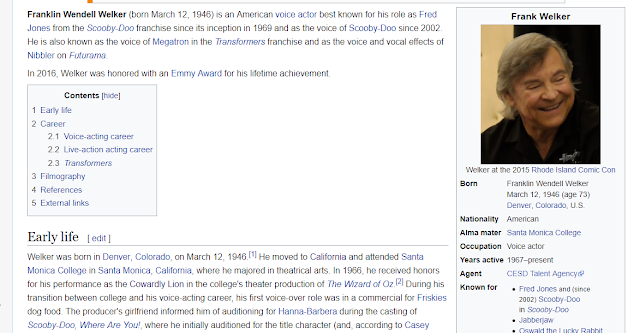 Since Fred on the show said "Makes Sense" I figured I'd look up the guy who plays Fred. Notice how Wikipedia mentions his performance as the Cowardly Lion in his colleges theater production?
Franklin Wendell Welker=312(FB)
Born on 3/12.