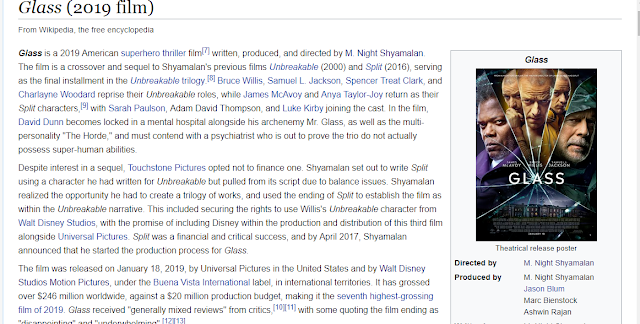 I just watched the movie called "Glass" that is the 3rd in Unbreakable series. I haven't watched Unbreakable or Split for a while now, but you can understand this movie somewhat without even seeing the others.
The guy from Split has to have his personalities come to the LIGHT...
Anyway the end of the movie seems to be putting a lot of Truth right in your face.
It's about an Elite group of people who don't want the rest of the world to unveil their Super Powers if they have them.
It's something I've thought for a long time...Anyone can use this knowledge, but it has been suppressed by people who don't want everyone to know about it. I see both sides as to why though. There really does need to be a balance and there  could be if the world wasn't so messed up from the start. Too many people corrupted by the world to be let in on the knowledge, yet at the same time they are using the knowledge to keep the world corrupted. It's truly a tough problem to solve. Especially when you think about Hermeticism...and it's all about perception of what's good and bad too...when in reality they are the same thing...What's good for me, might be bad for you and so on.

You have to be kidding me haha..I'm writing this blog post up and I just deleted a whole bunch of stuff because I am confused about what to think/believe in regards to all of this knowledge. I deleted it all up to the "Whats good for me, might be bad for you and so on" part and then looked at the TV. The film Glass started playing again because I never turned it off and it replays on Coto until you do. Right as I looked the TV the lady says "How do you know who's Good and who's Bad David? The part I deleted was wondering if there are Good and Bad people in the know. Some people using this to keep the world corrupt, but others using it to help us...just hilarious....but really..How do we know?

In the mix of recording this clip..Sam text me about Garth Brooks playing at Notre Dame and having the song called "Standing Outside the Fire".
I typed in Garth Brooks and see it equals 519(satanic)
and 186(FB)...it's only funny as both of these numbers were important to the Duck theme that began with Sam on 5/19.
I figured I'd type in the phrase I heard on the video in which I had synchronicity with....of course it's 519 too.
How do you know who's good and who's bad David?=519

There's a lot more in this movie that stands out. If you get the chance I would check it out. They talk about the elite lying to the world and much more. The scene in the video above alone is great.
Posted by The Mindless Freaks(Dan Behrendt) at 3:14 AM