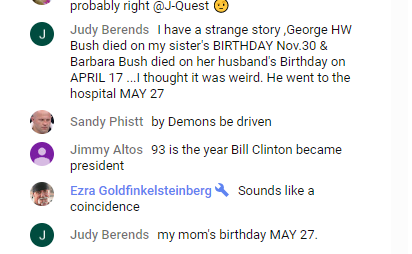 I just turned on one of Zach's videos and was reading the comments. I thought it was funny a lady with a name that is similar to mine was talking about the syncs to her family with Barbara and George Bush...especially considering my Uncle died on 4/17 and I've talked about that a lot this year.
Anyway a few seconds later Marian Marcus mentioned Benjamin Franklin dying on 4/17....
Now this is great because 2 big things in my life this year were the birth of my son on 1/17 and the death of my uncle on 4/17....like Franklin's birth and death. Plus how much have I mentioned the importance of Philadelphia over the years.

Ben Franklin=253
Philadelphia Pennsylvania=253
George Herbert Walker Bush=253
Also "Benjamin Franklin"=713(satanic)
Houston in the 713 area code.
Bush died 7 months 13 days after Barbara.
Francis Scott Key=713(satanic)
Sam Houston was ordered be arrested on 4/17 and Key was his lawyer. The KEY of David in regards to Philadelphia....Francis Got Key.
He's super important to the Bridge symbolism...Remember even after my son was born we had a weird thing with our lights in the house.....Thomas Edison died 117 days before his bday....Think about Ben Franklin/Electricity.
Posted by The Mindless Freaks(Dan Behrendt) at 11:17 PM