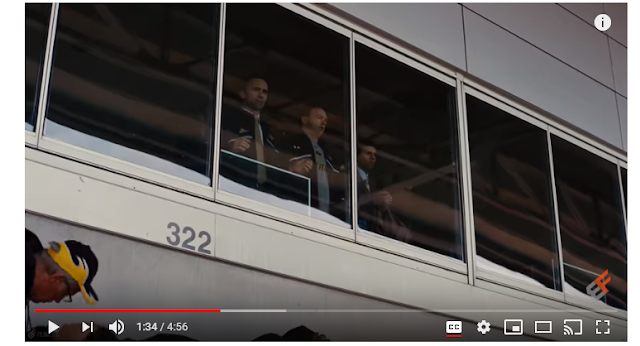 I'm wondering in regards to HW Bush dying in connection to the National Anthem...plus all the 53 connections.
If you go back and watch my videos just before Super Bowl 50 I talked a lot about the Dark Knight Rises and the field collapsing scene. Remember how they flash the 322 in this scene? I'm just wondering about this because of Bush and Skull and Bones 322...
Three Two Two=53
George Bush=53

Plus Bane waits for the kid to finish singing the National Anthem before he starts blowing stuff up. It makes more sense too in regards to the kicker being "Ravenstahl". It doesn't mean the Ravens will be in the Super Bowl, but could just be showing us the National Anthem symbolism.

Remember too after the field collapses it shows all the bridges around the City collapsing as well.

I wonder too as a while back I was talking about the importance of 8/6....Hines Ward wore # 86....the worst recorded East Coast Earthquake happened in 86'(1886). Thinking about the Bears stuff and them winning the Super Bowl in 86'.

Posted by The Mindless Freaks(Dan Behrendt) at 1:38 AM