Right away I see this story connects back to Cleveland. We get 2 black guys visiting Donald Trump today..one being Jim Brown who played for the Cleveland Browns and won an NFL Championship in 64'. Remember how Trump's national convention was in Cleveland just after the Cavs broke the 51 year curse in which the last time they won was the 64' NFL Championship.
Kanye West=51
Maga hat=51
Cleveland=51
Lebron James=51
Quicken Loans=51
Believe=51
Lebron James wore the Undertaker and Ultimate Warriors shirts..
The Undertaker was 51 years old..."WWE"=51
James was Jerome on Lawrence for Halloween and the show is about Channel 51 and Martin Lawrence was 51 years old.

Trump and the Cavs visited the White House on November 10th, 2016 which leaves 51 days in the year.
Remember that curse was also 51 years 5 months 23 days.
Donald Trump=523(satanic)
Think about how the Cavs lost this year on Kanye West's bday too.

Look how both of these guys bdays also sync up with Donald Trump.
6/8 is the 159th day of the year.
2/17 is the 48th day of the year.
Donald John Trump=68
Donald Trump=48, 138, 60(rev red) and 159(reverse)
Maga Hat=138
Kanye West=48(rev red)
Remember too..."Cleveland"=48(rev red)
They last won the World series in 48'.
Trump won the biggest election upset since the year 48' when Harry S. Truman upset Thomas E. Dewey.
Trump won the election just after the Indians lost in the World Series in 2016.
1948 was also the year of the closest Super Moon before the Super Moon just after Trump won in 2016.
Israel declared it's independence in the year 48'...(Jews identify with the Moon). Think about Trump declaring Jerusalem the capital of Israel...visiting the Western Wall and so on..
Wall=48
Mexican American War ended in the year 1848.
Pence became the 48th Vice president and he is from the land of the Indian.
Freemason=48

This story also comes 134 days after Kim Kardashian met with Trump at the White House.
Make America Great Again=134(rev red)
It's funny in that post I mentioned how Kanye West said George Bush doesn't like Black People in regards to Hurricane KATrina...I mentioned how it was connected to the Astros. It's funny to me as Hurricane Michael is going on right now. 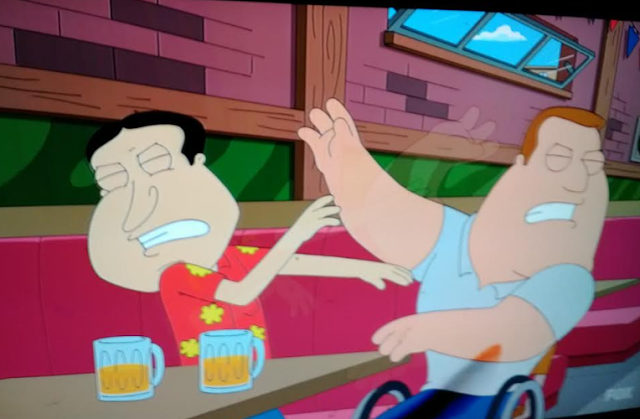 So just after posting the picture about Kanye West and the Astros I decided to search on my blog for the "48" stuff so I could add it to the top of the post. As I'm scrolling down the search I was reading the title of this post from May 19th, 2018...Right as I was reading the word "Wheelchair" Quaqmire on Family Guy said the word Wheelchair.
Wheelchair=92
It's season 13 episode 13....reading about the episode it's a lot to do with Cleveland too. He becomes a therapist after Quaqmire and Joe fight and what not.

Would you believe that Jim Brown was also an actor in a film called "Fingers".

If you've been following my channel since 2015 I have mentioned how Kanye West/Taylor Swift were connected to Queen Elizabeth II and Freemasonry. Remember Donald Trump came out to Queen "We Are the Champions" at his national convention in Cleveland 88 days after Elizabeth's bday.
Trump=88
Elizabeth=88
Kanye sang the Queen Song/Freddie Mercury song at Glastonbury...Taylor Swift then sang the song BAD BLOOD at the VMA's...think about the band Queen/Aids/Bad Blood..
Mercury has an 88 day orbital period.
This was all just after we got the "Freddie"=51..Gray=51 story that was synced the Civil War. "Taylor Swift"=51
Freddie Gray was also coded to Freddy Krueger and just then Wes Craven died the same day as the VMA's in 2015. Around this same time we had Hurricane Fred and Tropical storm Erika...Freddie Gray had a Twin sister named FredErika and another sister named Carolina in which Erika flooded.

Remember Taylor Swift just came out for the first time politically too on 10/8 which was 66 days before her bday. "Taylor Swift"=66(rev red) and her and Kanye's bdays are 6 months 6 days apart.

Posted by The Mindless Freaks(Dan Behrendt) at 12:21 AM