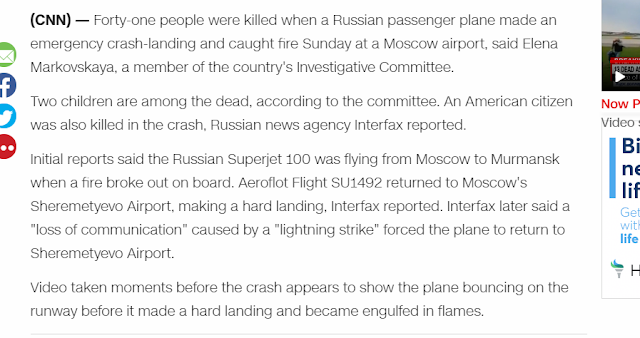 I don't think it's a coincidence that we got a plane skidding off the runway in Florida and then now we got a Russian Plane fire.
Remember when Putin had the video which showed off the Russian Military with a clip of missiles hitting Florida?

The Plane number of 1492 reminds me of Christopher Columbus as well....

I'm thinking about the Kim-Putin meetings on the 115th day of the year before the 115th World Series.

Along with this plane fire we get a story of North Korea doing Missile launches today.
Putin and Kim Jong Un just met together 10 days ago...
Both are connected to the Wall symbolism with Donald Trump.
North Korea=125
Today is the 125th day of the year.

Now CNN is giving us a story of Boeing knowing about problems before Lion Air Crash that was 189 days(end date) ago.....remember 189 people killed.
Posted by The Mindless Freaks(Dan Behrendt) at 8:38 PM