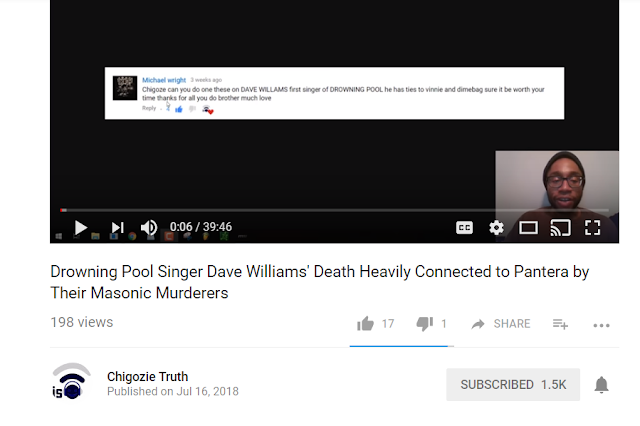 I just went to Youtube and the first video that popped up for me to watch was Chigozie's video about the death of Dave Williams of Drowning Pool. Now come on haha...
He's making the video because someone commented on his channel asking about the death a while back.
It's crazy that I just mentioned how I had synchronicity with the Band Drowning Pool on 7/2..then we got the death of XXXTentacion's cousin drowning in a pool....also Ray Emery in supposed Drowning.

The only reason I am making this post is this though:
Chigozie Truth=624(satanic)

The Drowning Pool stuff was big with the number 72 and the Cubs. Then I had the synchronicity with Family Guy in regards to my son who is all about 72. In that post I mentioned the connection to the Cubs vs Indians...
Rocky Colavito=624(satanic)
Detroit Tigers=624(satanic)
Aroldis Chapman=624(satanic)
My son's bday is 6 months 24 days before Rocky Colavito's.
Also 6 months 24 days after 6/24.
The Indians played the Tigers on 6/24 this year.
Zamien Behrendt=72 and 72(rev red)
Zamien James Behrendt=321(reverse)
7/2 is 3 months 21 days before the World Series begins.

Much more in connection to the death of my Uncle Barney, Uncle Clancy and Grandma in the past years and how it syncs to the number and date of 8/10. (See previous posts)
Barney died 8 months 10 days before Grandma Ellie. Grandma died 6 months 24 days before Clancy. Clancy died 6 months 24 days before my bday. Clancy's niece named in honor of my grandma born on 8/10.
Family Guy-My Son-Indians-Cubs-Vaccines
XXXTentacion's Cousin and the Band Drowning Pool Syncs

Remember all of the "Angel Gabriel" stuff I talked about a while back?
Gabriel=810
Rocky Colavito's bday is 8/10.

In the video Chigozie is mentioning Jeff Young asking about this as well. Jeff born 6 months 24 days(end date) before the World Series

Also the Cubs game that went to 17 innings that was important to Stoneman Douglas/XXXTentacion was 6 months 24 days(end date) before the World Series this year.

Posted by The Mindless Freaks(Dan Behrendt) at 12:01 AM