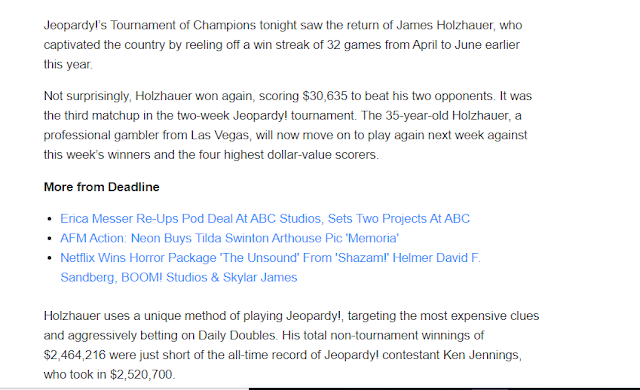 Just below that Dwight Howard chicken wings story I posted about earlier was an article about James Holzhauer and Jeopardy. Last night I saw something about a question and the Cleveland Cavaliers and I was going to blog about it..but was too tired. So now I'm looking at it and realizing a funny thing...James Holzhauer lost on 6/3...
James Holzhauer=63
He lost to the lady named "Emma"=63(FB)
Alex Trebek announced his cancer on 3/6 or 6/3..
The 36th season of Jeopardy began 6 months 3 days after Trebek announced his cancer on 3/6.
My last 2 blog posts were about this number....hmmm.. 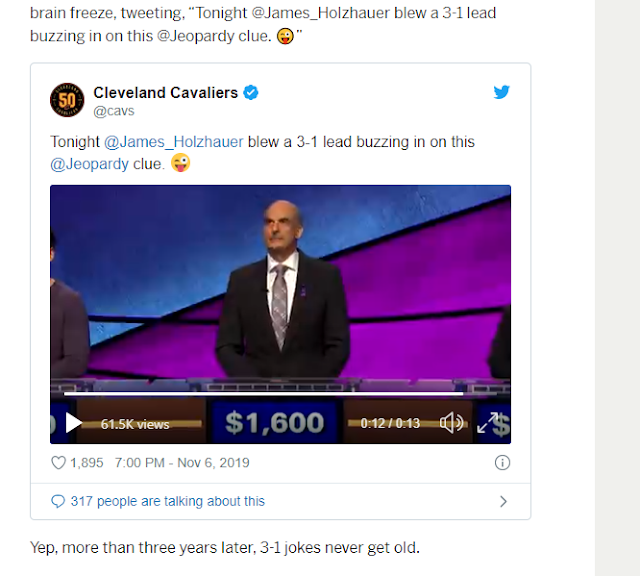 James Holzhauer got trolled because the other player Alan Dunn beat him to saying "Who are the Cavaliers"...
Cavaliers=63
I also find it interesting they always say it was a 52 year drought when in fact it was 51 years 5 months 23 days...so the question isn't even accurate on Jeopardy....

Also remember how they referred to James as Jeopardy James...or JJ.

James Holzhauer was also born in Naperville, Illinois which is where the Racism took place at the Buffalo Wild Wings haha.

I can't seem to find when the next episode he will be on is? It's sometime next week, but I can't find a specific date...It would be interesting if it is Monday 11/11 as that will be the 63rd day of season 36.
I still can't find his birthday either which I'm curious about the connection.

Also..."Cleveland, Ohio"=177(FB)
Interesting this game was on 11/6 too and I've mentioned the Cleveland Indians in regards to the the 116th World Series...as they also lost the World Series after the Cavaliers won.
Native American=63
Posted by The Mindless Freaks(Dan Behrendt) at 3:11 PM