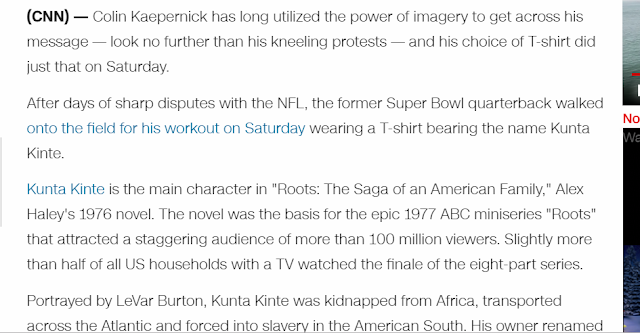 Kunta Kinte=63
Racism=63
I remember a long time ago he wore the Muhammad Ali shirt too.
Ali died on 6/3 in connection to the prophet Muhammad who supposedly died age 63.

As I think more on this narrative and how it connects to Charles Manson..I think we need to keep an eye on the Ravens. They were the team that Kaepernick lost to in the Blackout bowl..plus the song Blackbird is what Manson believed was telling black people to Rise Up....
Falcons..Rise Up..Black Bird..
Raven...Black Bird...
The Black Cat thing could be something connected to a superstition...just like how some believe a Raven is a bad omen...
Notice the Ravens won with 41 points over Houston this same weekend as Kaepernick's workout...
Super Bowl=41
Baltimore=41
The Super Bowl was held in Houston the season when Kaepernick originally knelt...and then the next season Manson died.
Plus the drama with the Cleveland Browns and Myles Garrett being suspended...Think about the Browns and Ravens history.
The Beach Boys song..on the Album 2020...

Ravens=83
This was a big number around Charles Manson's death at age 83.

I wouldn't doubt if this story is connected as well..Auden TATE gets injured in a scary play today...
Sharon TATE..Auden TATE...

Also I never documented before but Kaepernick just turned 32 years old...They kept telling us about the 32 NFL Teams and the 32 Owners...
NFL=32

The original preseason game when the controversy started was against the Green Bay Packers.
Posted by The Mindless Freaks(Dan Behrendt) at 12:25 AM