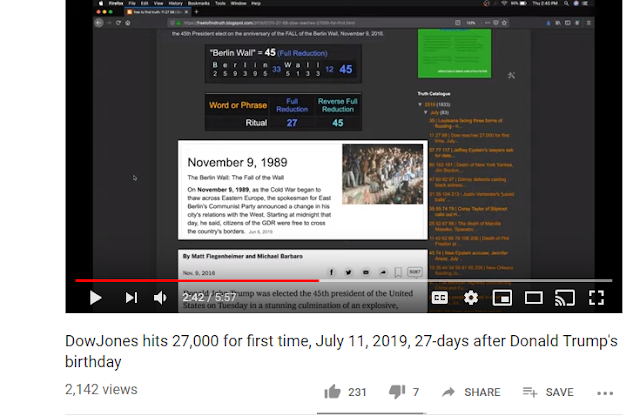 I just got home and listened to Zach's video about the DowJones reaching 27,000 for the first time today. It's also 27 days after Trump's bday. Trump won the election on the 27th anniversary of the Berlin Wall coming down...Think about WALL Street and so on..
I want to point out in regards to this video though..
Money=27
I know a lot of what I have been documenting is important to Money/Stocks..
Ross Perot was 27 years old than Tom Steyer and they were both born on the 27th. The "All That" Girl who portrayed Perot also born on the 27th of April.

Think how we just recently got another story of a Billionaire crashing in a helicopter on the 185th day.
Stock Market Crash=185=Donald John Trump

Slipknot tickets for this show went on sale the same day Bohemian Rhapsody the film came out.
Remember this was just after Kanye West went to the White House as well, and I have been documenting the importance of Kanye with Slipknot/Corey Taylor since 2015.
Kanye sang Bohemian Rhapsody at Glastonbury on Ross Perot's birthday in 2015. Then Corey Taylor called out Kanye for saying he was the greatest living rockstar... Kanye even said at the 2015 VMA's that he is running for president in 2020....so think about him visiting the White House just before the film Bohemian Rhapsody comes out...on the same day Slipknot tickets release for the Iowa State Fair.

Also the song Bohemian Rhapsody got extra famous because of the film "Wayne's World" that just so happened to come out 27 years ago.
Dana Carvey also known for portraying Ross Perot on Saturday Night Live.
Think about Freddie "Mercury" too....Mercury is the god of financial gain/commerce.....money.

Wayne's World is set in Aurora, Illinois.
We got that shooting in Aurora, Illionis on 2/15 this year.
Saturday Night Live=215
Henry Ross Perot=215
Chris Farley born on 2/15..
The last time Wayne's World was on SNL was on 2/15/15.
I got that Youtube Strike reminding me of Chicago and Farley...Chicago had the Valentines Day Massacre in 1929 the year of the Stock Market Crash...
That strike was also important to the Molly/Duck stuff that was important to the Aurora Bridge Duck Boat crash in 2015.
Of course someone a month after this was trolling my Mollie Tibbetts(Iowa) video...
Mollie Tibbetts=215
2/15 is the 46th day...
Twenty Seven=46
Slipknot=46

Also in regards to Trump saying he was Batman at the Iowa State Fair, it reminds us of the Aurora, Colorado Batman shooting.
I'm wondering too in regards to this if the reason Nipsey Hussle is important is because his wife used to date Lil' Wayne. Remember Wayne's song "My Homies Still" was used as predictive programming for the Aurora/Batman shooting.
Trump said he was Batman on Nipsey Hussle's bday in 2015...which is also Ben Afflecks bday(Batman vs Superman)...also Napoleon's bday..
The Dark Knight=215
The Dark Knight Rises=310(Francis Bacon)

It's funny wikipedia says The Dark Knight Rises is currently the 27th highest grossing film of all time...This film really woke a lot of people up, and was really big on Youtube with the "Truth/Conspiracy" channels too. This is the only film I have ever went to a midnight showing of in my life as well. I remember pointing out the 322 to my friends, but they had no idea what I was talking about haha.
Also it has Joseph Gordon-Levitt who is the main kid in "Angels in the Outfield". Interesting too thinking about the Mary Poppins connections...One of my favorite films in somewhat recent years is his film "Looper" which also stars Emily Blunt...Blunt is the new Mary Poppins(Mary Poppins Returns).
Emily Blunt=185(Francis Bacon)
Emily Olivia Leah Blunt=227....France/Nipsey/Affleck

Also in regards to the "Pig" year I was thinking about how many pig farmers I know and figured Iowa had to be important to that. Iowa is actually by a huge margin the state with the most Pigs and Pig Farms...The Pig State if you will...
Remember how Iowa is also important to France and the Flag of France....France important to 8/10 and this year as well after 8/10.
Paul Gray aka "The Pig" who died in Iowa.
Think about Charles Manson being important as well and the Tate and LaBianca Murders happening on 8/9 and 8/10...Death to Pigs....it reminds me of Pig Farms...also places like Farmland where my dad works in which they kill pigs all day long.
Piggie BANKS....

Also think about Jay Z being the first Billionaire Rapper and his connections to Beyonce/Kanye...
Trump being the Billionaire president...
It makes more sense why we got the story of Kanye West being out of debt...and then a story of Corey Taylor and the Holocaust deniers recently too.

I think I need to rewatch Wayne's World....if only I had more time.
Waynes World=159
Donald Trump=159
Herbert Hoover=159

Posted by The Mindless Freaks(Dan Behrendt) at 1:19 AM