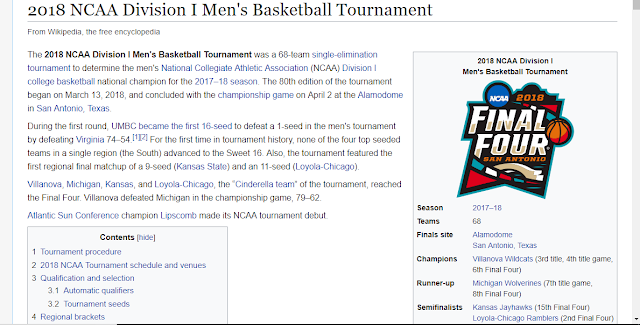 Something I just remembered in regards to the Virginia stuff and the NCAA tournament is that Virginia became the first # 1 seed to lose in the March Madness Tournament. It happened last year in a 74-54 loss to UMBC.

I'm just thinking about the importance of this considering what I documented about with the Blaisdell center in Hawaii. It hosted the biggest college upset of Ralph Sampson's Virginia Cavaliers team in 1982.
Ralph Sampson and Olajuwon were known as the TWIN Towers when playing with the Houston Rockets. The however collapsed in the NBA Finals and never won a championship. The Rockets however were the team who won both NBA Finals in between Michael Jordan's 6 Rings.
The Blackface stuff really connected to the Royal symbolism and remember how the Rockets were important to the KING symbolism. They play in the Toyota Center...Camry means Crown...see previous posts. Think about RALPH being connected to the King symbolism too.

It's funny seeing the Lakers(King James) just out of the playoffs along with the Sacramento Kings right now too.

It's funny too..in my post with Ralph Sampson I also mentioned the band P.O.D. and their Satellite Album that came out on 9/11/2001.
I didn't even think about him being a "Twin Tower" at the time.

Also Coach K of Duke's bday is the first day of Lupercalia.

Posted by The Mindless Freaks(Dan Behrendt) at 1:44 PM