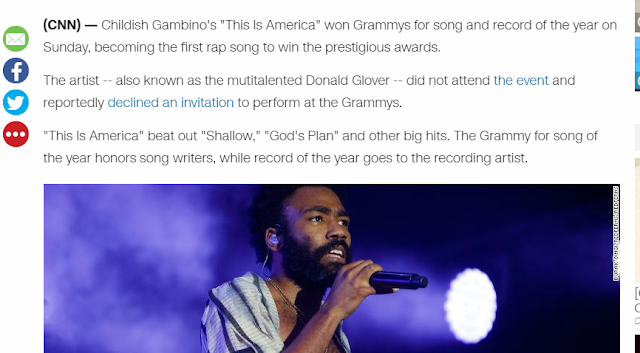 He even has 4.2 Million Subs on Youtube currently.
We are getting this story on the 42nd day of the year in "February"=42

In the video he does a stance similar to the caricature of Jim Crow.
How fitting considering the recent news in Virginia.
Remember Jim Crow is a character created by Thomas Rice who died in the year 60'.
Thomas Rice=60
Trickster=42, 60
Segregation=60
Whites Only=60

Childish Gambino also shares a bday with Mark Herring who blackfaced as Kurtis Blow.
He's got an interesting middle name as well...."McKinley"...like the 25th president who was assassinated...
Donald McKinley...
Trump=25=Pence and so on..

McKinley born on 1/29
America=129
Childish Gambino=129
Mckinley also died on the 87th anniversary of the Star Spangled Banner being written....he was replaced by 42 year old Teddy Roosevelt who died age 60.
McKinley died 43 days before Roosevelt's 43rd bday...
Remember Roosevelt important to the Philando Castile Story and McKinley important to the Alton Sterling story.
Both Stories came out on 7/6 or 6/7...
Pence born on 6/7 or 7/6.
Trump born on Flag day...think about that in relation to McKinley's death date..

Posted by The Mindless Freaks(Dan Behrendt) at 1:08 AM