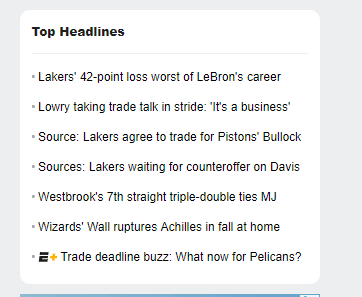 You have got to be kidding me...John WALL gets injured in a FALL at his home. The guy who plays for the team in Washington...think about it.

They notice a partial tear on January 8th and then fell on 1/29 and injured it completely.
So they noticed the partial rupture on the same day Donald Trump addressed the nation in Washington about Building the WALL.
Achilles=48
Wall=48, 60
Donald Trump=48, 60
Achilles Tendon=60

Wall is also 28 years old and this story comes 28 days after January 8th.

It also sticks out that we get this story the same day Trump has his State of the Union and it was supposed to be on 1/29 which is the day Wall Fell at his home.

Trump announced the next meeting with Kim Jong Un will be on 2/27.
Think how I have been documenting about France being important to 227.
Wall ruptures his ACHILLES...Achilles killed by Paris in the Battle of Troy.

Johnathan Hildred Wall Jr=42
He discovered the partial rupture 4 months 2 days after his bday.
With the end date it's 125 days which is interesting..
North Korea=125

He injured it completely 145 days after his bday..
North Korea=145
Posted by The Mindless Freaks(Dan Behrendt) at 1:25 AM