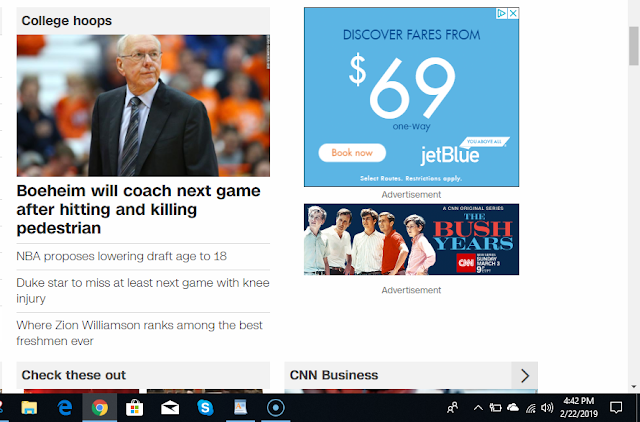 Jim Boeheim the coach of Syracuse in the news for killing a pedestrian on the Interstate the same day Zion Williamson's shoe blows out. Notice Duke's next game is of course against Syracuse.

I'm trying to think about the riddle here...The Duke stuff is important because of the Virginia stories. Remember Duke played Virginia after the Kurtis Blow story even. Duke also lost to Syracuse in January and their next game was against Virginia.
Notice the Duke became 15-2 after beating Virginia the first time...
Duke Blue Devils=152

Syracuse ORANGE has previously been connected to William of Orange who was the King after James II(son of Charles I/English Civil War).
Virginia Cavaliers..followers of King Charles.
I noticed these connections because of my videos talking about the Royal Family...

There's been a riddle with New York lately too.
Syracuse=111
New York=111
Zion Lateef Williamson=111
Blue Devils=111
I saw the story of Enes Kanter saying it's good to finally win after being traded from the Knicks to Portland. Kanter connected to 9/11 symbolism as well.
It has to be connected Carmelo Anthony as well.
Remember in 2017 we got the death of Syracuse player Fab Melo. He died 111 days before his bday.....It was the year Gonzaga lost to UNC in the tournament. Duke lost to Gonzaga, UNC, and Syracuse this season so far.
Also I mentioned Patrick Ewing(Knicks) in a post about all of this as well.

I also mentioned RALPH Sampson in regards to Virginia and I see Zion Williamson's mother maiden name is SAMPSON.

We are constantly getting stories like this in the media. I see today a big sports story is Robert Kraft and a prostitution ring. CNN also running a story of what went wrong at KRAFT Heinz. These stories on the 53rd day of the year just after Super Bowl 53 won by Kraft's team.
Robert Kraft=53
Jim Boeheim=53
Duke Blue Devils=53
Black History=53
Virginia=53
Patriots=53
Los Angeles=53
Maroon Five=53
53 year old "John Parry"=53 was the referee.
The only TD scored exactly 53 minutes into the game on Sony Michel's 53rd yard of the game.
The Rams only score was a 53 yard field goal.
So on...

Posted by The Mindless Freaks(Dan Behrendt) at 9:03 PM