In regards to 510 being important to North Korea/JFK and a number I keep seeing. Notice that Trump's 72nd bday this year will also be his 510th day as being the president. Not sure if he will still be in Singapore at this time, but it's very interesting....especially considering his bday of Flag Day too.
Korea=510
They announced their 6/12 meeting on 5/10.
Peace Summit=510
Basketball=510....think Rodman
Moon Jae In became president on 5/10.
Kim's brother murdered last year and born on 5/10.
John Kennedy=510
Trump meeting Kim 5 months 10 days before the JFK Assassination. 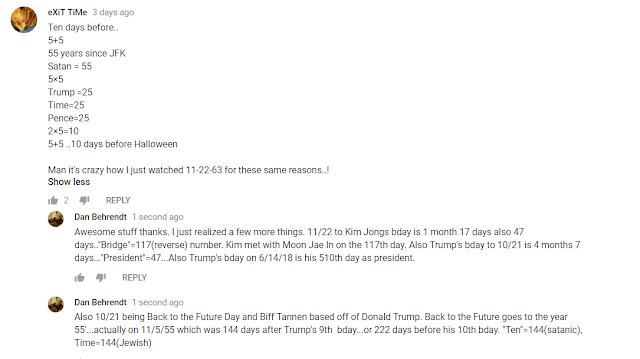 Also in regards to Back to the Future that goes back to the year 55'.
It goes back to 11/5 which is 144 days after Trump's 9th birthday. Or 222 days before his 10th bday.
Time Travel=55=God
I also almost forgot that Back to the Future II released on 11/22 too.
Remember Lorraine BAINES(LBJ) father doesn't know who John F. Kennedy is. Doc Brown lives on JFK Drive in 1955 and when Marty shows up Doc has a bandage on his head reminding us of JFK being shot. Marty only meets the Baines family cause he got hit by the car.
Also think about how the first film begins on 10/26/1985.
10/26 was the day Trump released the JFK Files also Hillary Clinton's bday.
Also I can't help but think about MJ Fox and Teen Wolf being released that same year. All the 2015 coding that is going on....Teen Wolf all about the Civil War/Lincoln symbolism...Lincoln another assassinated president.
Think about how Bane in Batman destroys the Bridges.

I was wondering if the date of October 5th might have significance as it too can be written as 5/10....
Notice it's 1 month 17 days or 48 days before the JFK assassination.
Donald Trump=48=Kim Jong Un=Russia and so on..
Bridge=117(reverse)

Also in regards to October 5th remember how it was skipped when the Gregorian Calendar was created. It went from Oct 4th to October 15th to fix the 10 day drift.
The Clock in Back to the Future gets struck by lightning at 10:04...
10/4 leaving 88 days in the year as so on..
Something I missed in my video about the Gay Cake story being 7-2 on 6/4 in connection to JFK/Civil Rights.
JFK met the Pope on 7/2 exactly 1 year before the Civil Rights Act was passed.

What else is interesting is that the media told us of this meeting on 5/10, yet on Wiki it says the meeting was planned since March 8th this year.
Exactly what I have been saying....March 8th is the anniversary of the missing Malaysian Airline..Flight 370.

Gonna have to look into the death of Kate Spade as well...thinking about Trump/Spades in relation to Cards..
I've documented about Joe Dirt 2 going back in time and I'm reminded of Dickie Roberts the Child Star movie in relation to Michael J. Fox's film Life with Mikey....
Also I've recently documented about Eric Stolz the original Marty McFly and Sylvester Stallone/Mask.

Posted by The Mindless Freaks(Dan Behrendt) at 4:48 PM