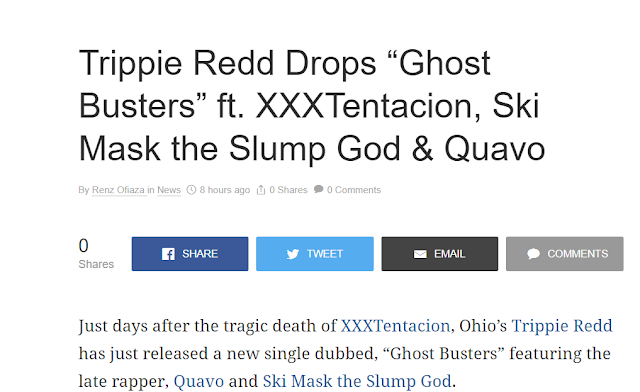 Now this is hilarious.
They drop the first posthumous song of XXXTentacion..
It's called Ghost Busters....
Ghost....he just dies...I mean hilarious....but what sticks out to me even more is what I mentioned in my video in regards to Bill Murray and Valentines.
I was talking about the "67" and with Bill Murray and the Valentines Day Massacre.
Bill Murray's character on Ghost Busters II is hosting the show where the lady says the world will end on Valentines Day 2016.
Ghost Buster's came out on 6/7...
Valentines is 6/7 Eastern Orthodox...
Bill Murray=67 and so on..

Also...."GhostBusters"=173
XXXTentacion=173
Trippie Redd=173
40th prime is 173
Valentines=40, 67
Bill Murray 67 post
Remember in 2016 they released the new Ghostbusters film with the Girls too...Then the Cubs won the World Series...exactly 67 weeks before the Stoneman Douglas Shooting....
Cleveland Indians=67
And so on...
The Stoneman Douglas team won the High School baseball championship in 2016 as well.

Ghost Busters Youtube Video
Go listen to the song as well. They bring up the number 14 a bunch of times in the beginning.
Fourteen=40

Posted by The Mindless Freaks(Dan Behrendt) at 1:43 AM