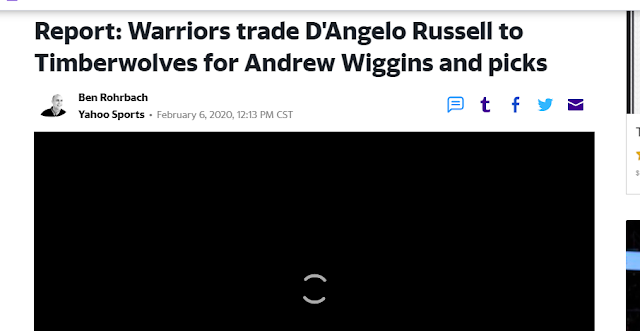 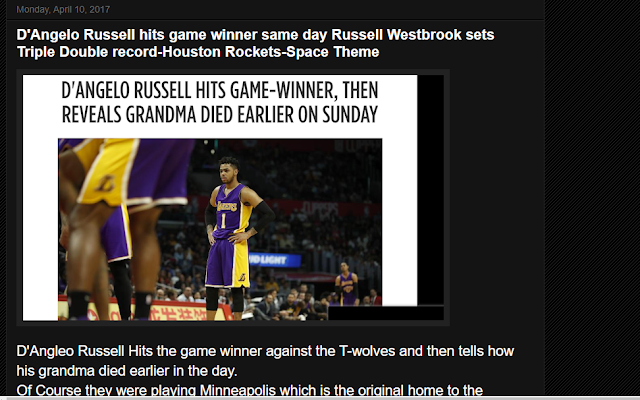 Blog Post
It's even more interesting considering I have a blog post from 4/10/2017 that was connected to the Rockets.
D'Angelo Russell hit the game winner over the Minnesota Timberwolves...the same day Russell Westbrook set the Triple Double record.....D'Angelo's grandma also died that same day...In this post I even mentioned how Russell and Wiggins have the same bday of 2/23. Now they are traded for each other....
D'Angelo drafted by the Lakers in 2015, which earlier in the year was important to Andrew Wiggins and Zach Lavine and the Teen Wolf symbolism.

In this post I mentioned how the Warriors vs Cavs game on the same day Eugene Cernan(space) died....the Warriors scored 126 points and Cernan died 1 month 26 days before his bday. Just thinking about Kobe and 1/26...remember this same year I started thinking the Rockets would win and not the Warriors...
Remember too that Kobe announced his retirement just after Flip Saunders died. Also the original Teen Wolf Kevin Garnett retired before the season began in 2016.
This was also after Moses Malone and Darryl Dawkins died too...the first ABA player and NBA players out of High School...like Kobe Bryant...then Kobe's final game was connected to Moses Malone and Lupercalia(wolf festival).
Both Dawkins and Malone important to Philadelphia.

To put this in perspective....James Harden was sued by Moses Malone Jr. in 2017..the year I was all about the Rockets yet again.

It's funny too as in 2016, before Barney died...I originally thought the LSU Tigers would win the championship due to the Nebraska/Teen Wolf narrative....Funny how they won this year...then the Chiefs won like I thought they would in 2015... 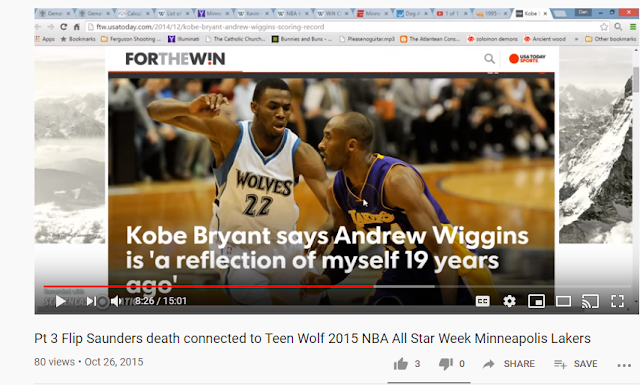 In my Flip Saunders videos I even mention how I think Andrew Wiggins is gonna be the next Super Star..like Kobe Bryant haha and he hasn't done much of anything yet...maybe this change will spark something?
The reason I thought this was because Kobe broke Jordan's scoring record against the T-Wolves. They made it seem as if Wiggins was a young Kobe similar to when Kobe guarded Jordan at a young age. Think about LeBron beating Kobe's record though..

Flip Saunders, Andrew Wiggins, D'Angelo Russell all born on 2/23.
Flip Saunders announced his cancer on the 223rd day of 2015 which is 8/11. Think about this yet again....8/11...Kobe Zion.
The T-Wolves opened the season against the Lakers after Saunders died and the total score was 223 points.

Remember the All Star Week in 2020 is important to this same Teen Wolf narrative from 2015.
Zach Lavine got ripped off from making the All Star team this year too. He is in the 3 point contest though..

Posted by The Mindless Freaks(Dan Behrendt) at 1:40 AM