Taylor Swift calls out the White House at the VMA's 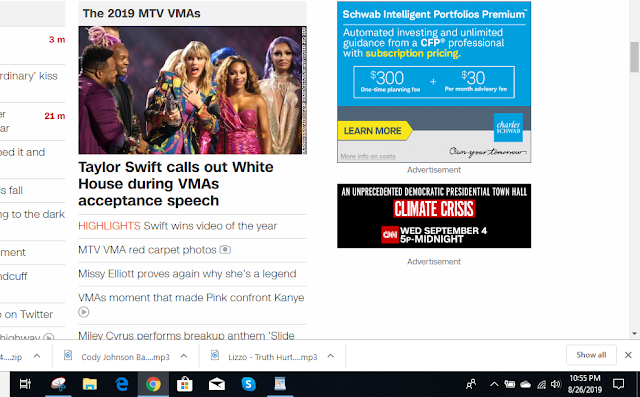 Oh really? Did I not say earlier this year that the narrative with Taylor Swift/Kanye West/Slipknot was important..
Now tonight at the VMA's it was compared to a Taylor Swift Concert and not the VMA's....It was her first performance since 2015 too...the big year I was referring to with the symbolism...
Remember I brought it all back up because of Kanye's visit to the White House in October. Then Slipknot tickets went on sale the same day "Bohemian Rhapsody" came out.
Notice how CNN gives us a main story of Taylor Swift calling out the White House.
Kanye said he was running for president in 2020 at the 2015 VMA's.

The other story below it mentions how the Swift-Kanye incident in 2009 involved PINK. This makes me laugh even more as Pink has been super important to a lot of things.

I'm wondering if we are going to get something connected to Freddy Krueger soon? Possibly the death of Robert Englund....He has a connection to Mark Hamill as well who is important to the Big Bang Theory...Remember Corey Taylor was wearing the Star Wars shirt when he called out Kanye.
Englund...England...Queen/King...
Wes Craven important to the Vampire symbolism too..

Posted by The Mindless Freaks(Dan Behrendt) at 11:27 PM