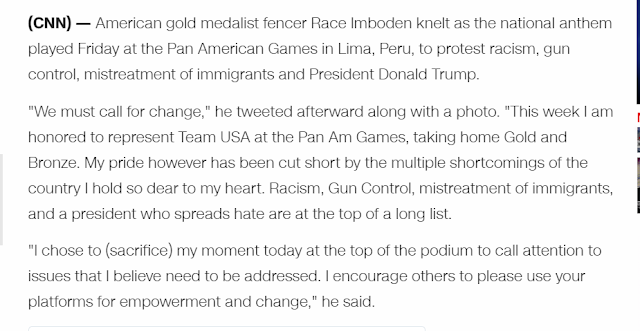 A guy named "RACE" kneels at the Pan Am Game? You have to be kidding me. Once again, you don't need numbers to see the ridiculousness of it.
The kneeling was because of RACE...Racial injustice and so on..
Race Imboden=89
He knelt on Friday which was 8/9.
Race=89(Jewish) 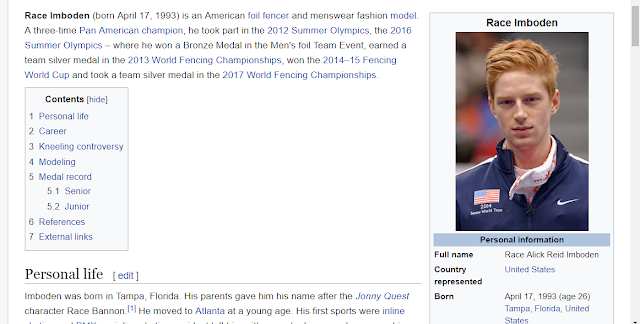 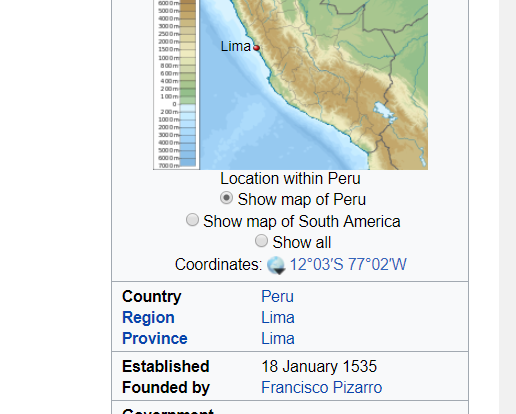 Remember the Harvest Moon coming while Zach is Anarchadelphia falls on the 205th anniversary of the the Star Spangled Banner being written.
Philadelphia=205(Jewish)
Think about 8/11 in regards to Philadelphia/Hulk Hogan/Earthquake and so on..
Think about how Zach is connected to the number 89 as well. His name and his fathers name equal 89...his mother born on 8/9 or 9/8 and he always mentions the coldest day on record is his bday and it was negative 89 degrees.
Porn=89(FB and rev FB)
Zach's Hacked Livestream
The link above explains much more to what I am saying..


Also in regards to the Wall symbolism....Race Imboden is in the sport of FENCING...
His bday of 4/17 also interesting..
San Francisco California=417(Franc Baconis)
4/17 is also the day Ben Franklin died...
Montagraph..DB SF April 17..the day my Uncle Clancy died connected to the Eagles winning the SB.

Also remember earlier this year the former Peru president supposedly shot himself on 4/17? Notice he was president until 2011 too.
Alan Garcia=417(satanic)

Posted by The Mindless Freaks(Dan Behrendt) at 7:18 PM