In light of all the things I keep documenting about Cleveland....it is very interesting this story of Priests molesting kids has blown up in the media...
I've been documenting about this topic for a long time now. It is interesting too in regards to how Cleveland and Boston have a relationship with 1948....I documented a bunch about the Priests in the film "Spotlight" that is about the 87 priests in Boston..
Priest=87

Also remember how Youtube changed the thumbnail on my Cleveland Indians/Finger symbolism video to a picture of Father Howard....Father Howard the priest who did weird things to me as a child...also it's been an inside joke he molested me for years...then he got kicked out of the church for molesting a kid.
All of the priest symbolism went back to the Jesuit Priest in my town Father Paul who died at the Jesuit residence of Creighton....Remember he lived on the Indian Reservation in Rosebud, South Dakota......The guy who reached out to me about the Price is Right mentioned Rosebud, South Dakota as well...He said his brother in law was a minister at Rosebud, Oregon which is where Bob Barker was born..then he was a meteorologist in Springfield, MO where Barker grew up..

All of this stuff is seemingly pointing to a big event in the works.

I was thinking about how I keep saying the number 127 is important to the Cleveland Indians....Something sparked my brain that Pearl Harbor happened on the date of 12/7...it's interesting because of the 114th World Series..."World War"=114 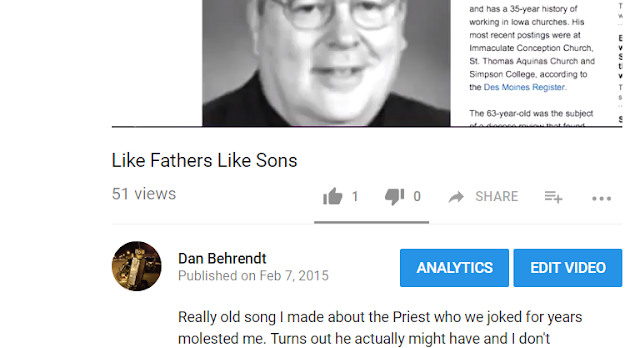 In regards to Boston too, I remember making a video before I knew a lot about Gematria in regards to Season 11 Episode 4 of South Park being about Russians trying to get a bomb to Boston....later you find out it was a diversion for the British to Attack the US...They put a bomb in Hillary Clinton's vagina in this episode...
The reason I looked this up was because in my "Spotlight" post it was all about synchronicity with South Park's 87th episode about Catholic Priests molesting kids and my daughter Claire.
South Park=114
Claire=114
Also the film Spotlight involves Bernard Francis Law who was born on 11/4.

Posted by The Mindless Freaks(Dan Behrendt) at 8:52 PM