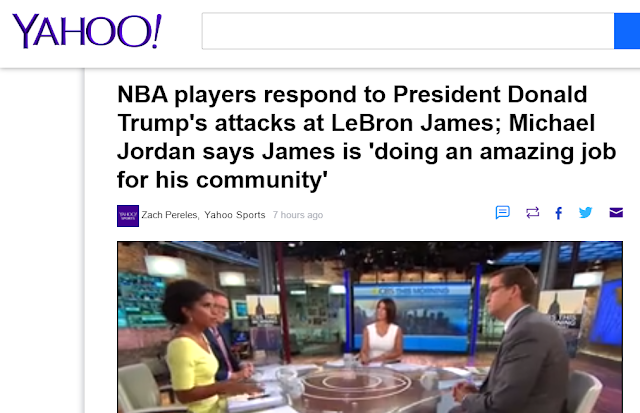 Trump tweets this 5 months and 2 days after Don Lemon's 52nd bday.
His interview was about the I Promise School that opened up in Akron, Ohio.
Akron, Ohio=52
CNN Tonight=52(show Lemon hosts)
Don Lemon=239(Jewish)
239 is the 52nd prime number.
Remember Lebron originally called out Trump on 23/9 or 9/23 the same day Trump called out the NFL players for not standing during the national anthem. Of course it was synced up to the Flag being sewn at 239 arch street in Philadelphia and the Eagles in Super Bowl 52. Trump also born on Flag Day.
Think about 8/3 as well....Trump calls out the NFL in connection to the number 52 before SB 52....
Now get this story...."Football"=83

Remember the Cavaliers and Trump visited the White House on the same day in 2016(November 10th)...
Trump won the election on the day that leaves 52 days in the year(11/9) and it wasw 52 days(end date) before Lebron's bday.

White House=52
President=52
Government=52
Pope=52(Trump/Pope/Lebron all connected).
Remember in 2015 a big thing I talked about too was Michael Jordan/Philadelphia/Royal Family and the Popes visit.
Jordan turned 52 years old in 2015 and he owns the Charlotte Hornets....then we had Princess Charlotte born on 5/2. Elizabeth became Queen in 52' age 25.

We just had the recent story reminding us of Osama bin Laden again as well...remember he died on 5/2....
A bunch of the above stuff also has connections to 51 and think about how Osama really died on 5/1 but it was already 5/2 where he died.

Posted by The Mindless Freaks(Dan Behrendt) at 5:56 PM