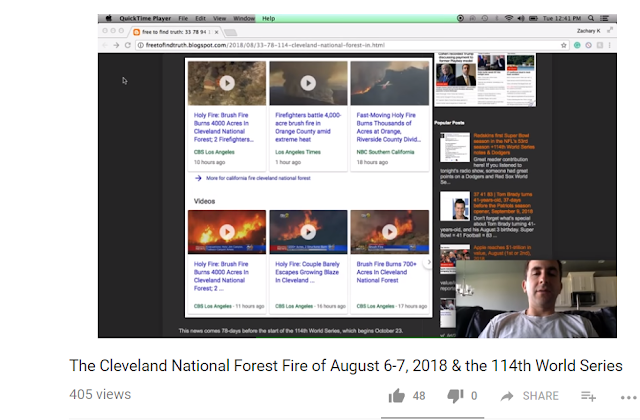 I took a bath earlier and I was listening to Youtube videos.
I never even heard of this Cleveland National Park Fire that was in the news until this video.

They are calling it a Holy Fire...which is a fire that happens in connection to EASTER.
Read my comment on Zach's video below in regards to why it's important to the Cleveland Indians....Remember Rocky Colavito was traded on Easter Sunday of the year 1960...The same day the Indians played the White Sox in an exhibition game at Russwood Park. After the game Russwood Park mysteriously burnt to the ground. It was an all wood park, which is why it was able to burn down.
Notice too that Wiki mentions a historian talking about an odd occurrence in regards to Holy Fires  in the year 162AD.
Major League Baseball=162 and so on...
Cleveland National Forest=94 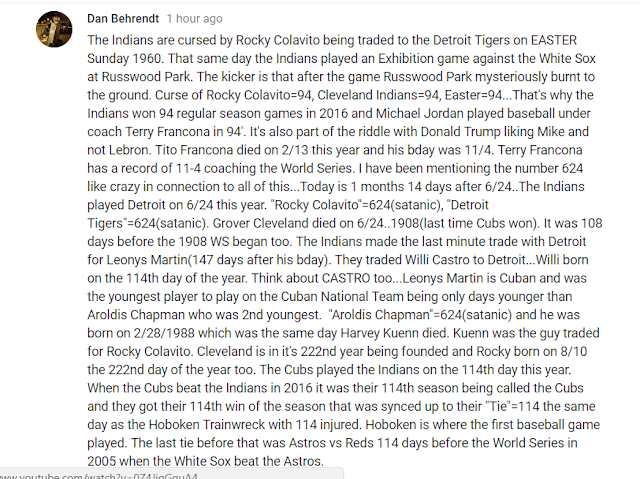 Cleveland National Forest was created on 7/1 in the year 1908?
So just days after Grover Cleveland died age 71 on 6/24 the big Rocky Colavito number.
Also 7/1 this year was the day "Lebron James"=114 signed with the Lakers and it's also 114 days before the 114th World Series.

Zach mentioned in the video that the fire began on August 6th which is 78 days before the World Series this year.
October=78
Cleveland=78
The story in the media on August 7th or 7/8....
Zach's Blog Post
Stephen Cleveland=78(rev red)(Grover's real name)

Notice that easter this year to the day this fire began was 127 days also 4 months 5 days.
Remember 127 is the big number in 2016 that was connected to the Indians and Michael Jordan....The Dakota Access Pipeline and North Dakota.

The Indians lost 4-5 on Easter Sunday this year.


Also don't forget the CARR Fire that supposedly started with a Flat Tire....remember I had the synchronicity with a Flat Tire and I noticed my dads license plate was 624 on it....My dad born on April 11th or 11/4 and his bday is 6 months 24 days before Nov. 4th or 11/4. His full name equals 114 as well.
I wish I could remember the date, but when I was a kid we were out at my grandpas farm and I told my dad a car started on fire. I think it was our car, but it might've been a car that was out there. I remember though that my dad didn't believe me that the car was on fire, but when he went outside the car was engulfed. The fire department came and everything. I'll ask him about it because I know he remembers...I was really young probably like 5 or 6.
Carr Fire=78
Cleveland=78

Posted by The Mindless Freaks(Dan Behrendt) at 1:35 AM