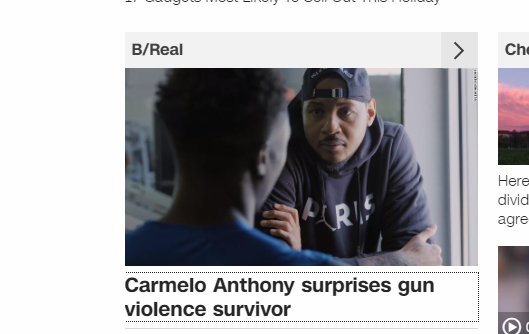 Carmelo done playing with the Rockets and now a story of him visiting with Zaevion Dobson's brother in the media? You have to appreciate Carmelo wearing the "Paris" shirt considering the Dobson story was 34 days after the Paris Attacks....Carmelo is currently 34 years old.
Zaevion=34(rev red)
Fifteen=34(rev red)

The whole Zaevion story was about the number 56...
Paris France=56
Isis=56
Zaevion=56
Three=56(Made it a big deal he saved 3 girls from 3 guys shooting in 3 shootings that night)
Spray of Bullets=56(how the media highlighted it)
Zack Dobson=56
David Rausch=56(Knoxville Police Chief in the story)
The Tennessee State shooting happened 56 days earlier..(Zaevion from Knoxville, TN).
Knoxville named for "Henry Knox" who died age 56.

Would you believe too...
Zaevion Dobson=190(reverse)
I didn't know reverse at the time and 190 is really significant lately.

I'm thinking about some of these things here....remember Zack Dobson was wearing the Oklahoma State hat and this shooting wasn't too far off from the Adacia Chambers OSU drunk driving incident. The color "Orange" was big at this time...Broncos/Clemson....
Orange is the new Black
Peyton Manning went to Tennessee(orange) and wins the Super Bowl with 24 points after this...Zaevion wore # 24 and more...
It was the Bronco's 56th season.

Posted by The Mindless Freaks(Dan Behrendt) at 12:17 AM