I'm trying to organize this Alex Trebek stuff a bit in this post...

On October 11th I was contemplating finishing my book with a story that involved Sam and Cisco in relation to God. The next day on 10/12, I was at work telling a co-worker how I used to write a bunch of music and it was basically my life, and it's odd that I hadn't wrote a song in a long time. It's mostly because the concepts I was making music about involved this knowledge and wanting an understanding of the world...A little bit after this conversation I got a text from Cisco, who I used to make Atheist rap music/beats with asking I would come help him make beats for some kid who is trying to do Emo-Rap. A few days after this I got a text from Sam about the death of the KMK guy....which isn't that crazy, but I haven't really had too many texts from Sam lately..like only a 3 or 4 texts in the last few months...

On October 17th YouTube put an age restriction on one of my old song videos called, "simba shut the fuck up" that I put out on 10/11/11. They did it by "Jesus" Numbers..and the picture I used in the video was my Jesus Halloween costume when I went to the bar with my cousin Timmy dressed as Fred Flintstone...This was important to my uncle Barney dying(Barney/Betty) and a lot more..I thought this was important because Cisco is also my uncle Barney's nephew and the story about him and Sam in my conclusion involved God and YouTube copyright claiming my Mitch Hedberg videos...and also our Atheist Rap video called "Goodbye Forever" that I put on YouTube on the date 3/18.

Here's what I wrote in the conclusion of the book to make more sense of this story...I need to fix it though, because I misread my blog post thinking Sam text me on 10/12, but it was actually 10/14.... 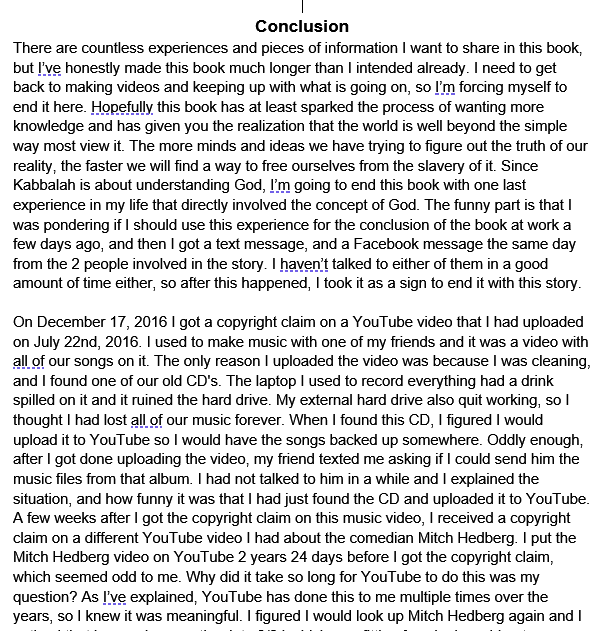 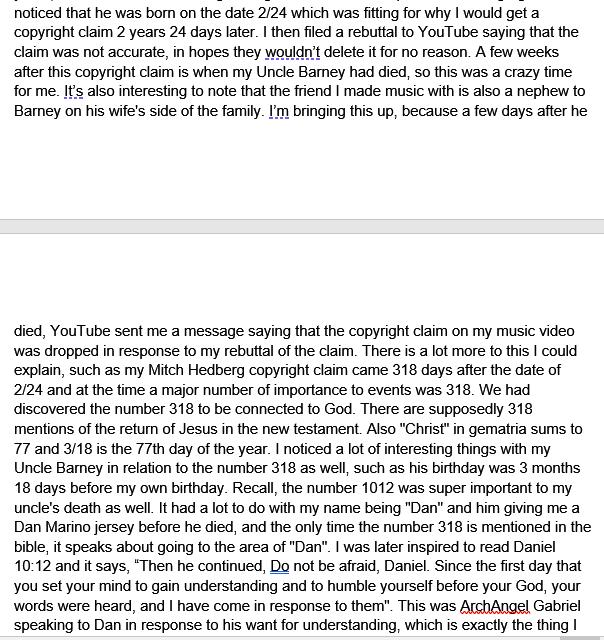 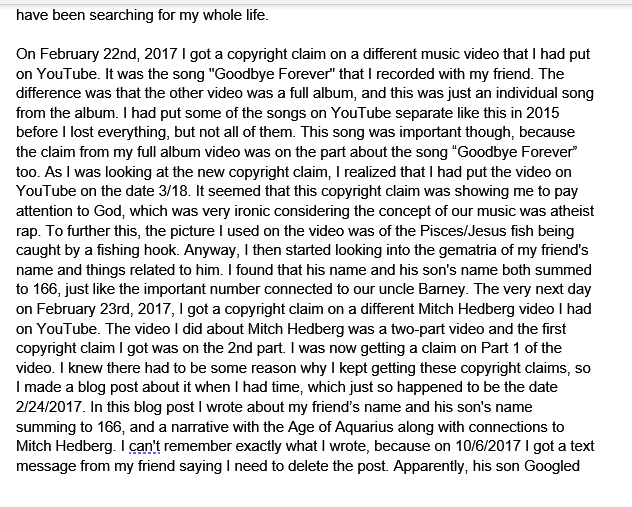 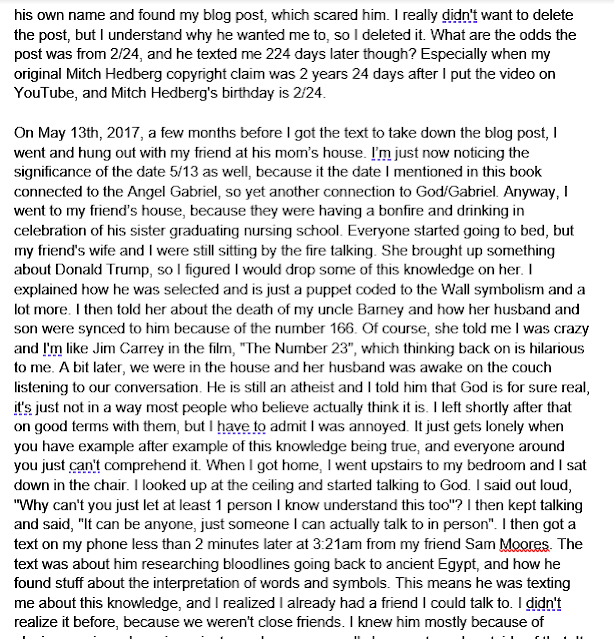 Would you believe that Sam texted me 224 days after Cisco's bday and their bday's are 3 months 18 days apart too?
YouTube also restricted my video on 10/17/2020, which was 2 months 24 days after my Uncle Barney's bday.

I even mentioned in the post on 10/17/2020 that Jeopardy may be important, because it was synced to my Uncle Barney. Also Mitch Hedberg has a connection to Charles Manson, which is a theme that began right around the time that Barney died and one I have been following like crazy again. 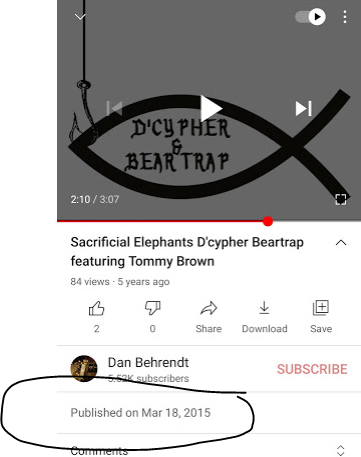 On October 27th I was giving my girlfriends brother a ride to work and glancing at Facebook at the same time. One of the first posts I saw Cisco sharing one of our old rap videos called, "Sacrifical Elephants"...I instantly knew it was important because a lyric in this song by Tommie Brown is about "Helter Skelter/Charles Manson".  I then noticed that I put the song on YouTube on the date 3/18, which couldn't be a coincidence...Of course 10/27 to 3/18 is 142 days and a span of 224 days after as well.
Charles Manson=142
I also noted that Tommie and Cisco's bday's are 5 months 25 days apart..."Helter Skelter Theory"=525
After I dropped off my girlfriend's brother I stopped at the gas station and parked next to a McDonald's receipt order #194 on it..."Charles Manson"=194
As I was leaving the gas station I realized that 3/18 was 224 days before this happening and I looked over to see the Diesel price was also $2.24 at this station.
I then looked at my girlfriends brother in Gematria and I saw that his name summed to 194 in English Extended...so I figured I should pay attention to this cipher as well...
We then got the death of Sean Connery on Halloween, and he was someone I blogged about watching out for in April 2020 due to Pussy Galore dying and his connection to the MOON.
Moon=210(Eng Ext)
Pussy Galore=210(FB)
Connery died a span of 210 day after Pussy Galore..
Connery died 2 months 10 days after the anniversary of the Great American Eclipse.
Chris Schwery=210(FB)(Cisco's name)
Barney Murphy=210(FB)(My and Cisco's Uncle) 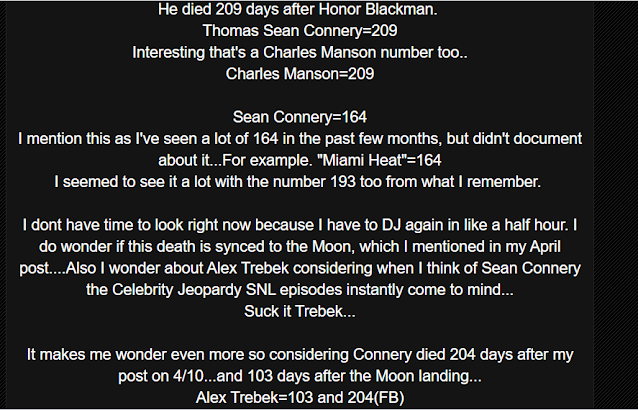 In my original post about Sean Connery though, I mentioned how Alex Trebek was synced up to him as well.
What stands out about this is that the date I begin with in my Conclusion is 7/22...I got a copyright claim on Cisco and I's album I put on YouTube on 7/22....this just so happens to be Alex Trebek's bday..
Alex Trebek died a span of 3 months 18 days after his bday..
7/22=.318
James Bond=318(FB)
Celebrity Jeopardy=318(FB)
Barney's bday was 3 months 18 days before mine. He also died 3 months 18 days after the Jesuit anniversary...
I was also told that he had about 3 million dollars when he died that was going to be divided up between 18 grandchildren....which was $166,666...166 another big number with Barney...
A bunch of other 318 too such as how my Grandma Murphy died 318 days after my bday the same year Barney died. There was a major Jesus theme/Jesuit/Knights of Columbus theme around this time....the death of Keion Carpenter...the Flintstones and my Jesus costume...the letter I got in the mail expressed shipped about Jesus the day Barney died...Ben Gleib following me on Twitter..
I didn't know this at the time...but...
Ben Gleib=318(FB)
Idiotest=127(FB) and 201(FB)
He started following me on Twitter on 1/27...think about the Jesuits and 201 too.
He followed me 224 days after his bday and the first episode of Idiotest was on the 224th day of the year.
Something I noted a long time ago was that...
The Society of Jesus=224
Keion Carpenter=224(reverse)
In the mix of all of this recall that my friend Derek asked me about the numbers 37 and 73...."Mike Cole"=37 and 73...
Derek follows this knowledge but we have different views in relation to God/Jesus.
I'm going to leave it here but I do want to note that the Miami Dolphins stuff with my Uncle was synced to Charles Manson....I guess the point I'm making is that now that I know Francis Bacon is important, I can see a bigger picture to the happenings from 2017...I didn't realize that Charles Manson was synced to the Dolphins stuff and so on...
All of this does seem to be connected to God though...but I will always wonder if I am being manipulated to believe this...There is definetly a greater power/understanding of how this can all sync up that is for sure.
To finish this post off, Today at work my first customer was wearing a shirt that said, "42 Universe, Life, Everything" with the Vesica Piscis on it....A bit later the Pepsi guy was talking to me and I noticed that his cart had a big 224 on it, and then saw my Aunt Mary(Co-Worker) was digging though a box with the number 224 on it at the same time...
I also want to mention that I realized my cousin who is helping me with the book goes by the name "Megan Alice" on Facebook....I'm not 100 percent sure, but I assume that is her middle name, and if so it's perfect...
Megan Alice Behrendt=224(FB)
I have wanted to call this book "The Synchromystic" for a long time too...I can't remember the exact date but Zenith commented on a video a while back and said "You are a Synchromystic" and I was drawn to a title of "The Synchromystic" ever since.
The Synchromystic=224
I've been thinking about adding a caption such as...
"The Synchromystic: Understanding the World Through Signs, Symbols, Letters, and Numbers"=1012
This makes me laugh even more because 1012 is a number associated with 318 and Barney too...318 days is even sometimes 10 months 12 days and so on..
Posted by The Mindless Freaks(Dan Behrendt) at 1:48 AM