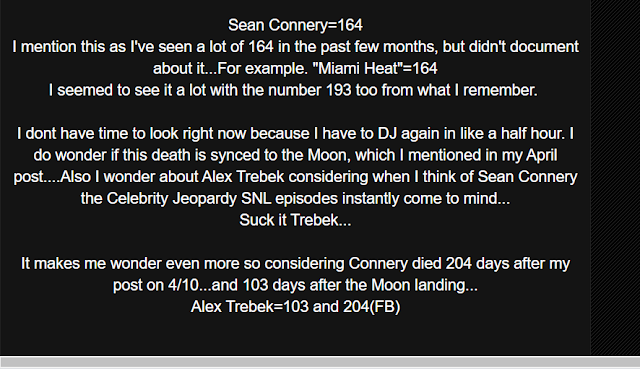 I knew when Sean Connery died that Alex Trebek was important, now Alex Trebek is dead on 11/8 from cancer?
Cancer=118
His Final episode will be aired on Christmas Day...so a span of 1 month 18 days after today.

These are the James Bonds I mentioned in my old posts about James Bond....

Recall that I've mentioned the date 8/6/2022 being important to the Moon and Tisha B'Av too....I only mention this because Alex Trebek was contracted to the year 2022 with Jeopardy...The year of the Tiger and so on...

Think about Kamala being from the San Francisco Bay too which was important to Tisha B'Av and 8/11 and today is 11/8 too. Kamala became the VP candidate on 8/11/2020.

So as I'm writing this, I am thinking that something doesnt make sense...Jeopardy doesn't usually have a series finale in November...I then started researching and went back to the Wikipedia page and that part is now gone....So someone vandalized the page to say that, which is a very odd thing to write....this is how I know I was supposed to see it though....it's seemingly pointless, but it was actually perfect for my thoughts on it...

Wiki also mentions the Golden Girls episode with Rose and Charlie and Jeopardy...

Remember last year when I was talking about Saturday Night Live being important to this too with the show "Cheers"....it was then important to Titus/Mount Vesuvius/2nd Temple/Kentucky Derby......Notice the Woody Harrelson's girlfriend on White Men Can't Jump is actress ROSIE Perez..This is also important to why I think 8/6/2022 is an important date.

It also mentions Weird Al, and he was important to the band Goldfinger and why I documented about Sean Connery earlier this year.

I need to think more on it, because I know there is some type of connection to my Mandela Effect/Duck/Horse stuff that was all important to Tisha B'Av in 2019...

Posted by The Mindless Freaks(Dan Behrendt) at 2:45 PM