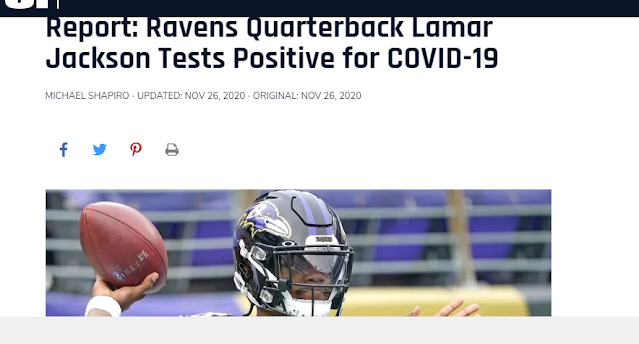 I think I cursed the Ravens this week lol, now Lamar Jackson has coronavirus?

What I forgot in regards to the Ravens is that Robert Griffin III is the backup for Lamar Jackson. Remember the South Park episode that is important to the Redskins changing their name to Washington "Football Team" involved Robert Griffin III.

So it's fitting that Lamar Jackson would get coronavirus the same day Washington(Indians) beat the Cowboys on Thanksgiving....plus the Ravens are set to play the Cowboys next Thursday too.

I also mentioned the connections to 2017 in that post, which is the season I thought the Eagles would play the Steelers in the Super Bowl.....This happens before the Steelers vs Ravens game...

Posted by The Mindless Freaks(Dan Behrendt) at 11:43 AM