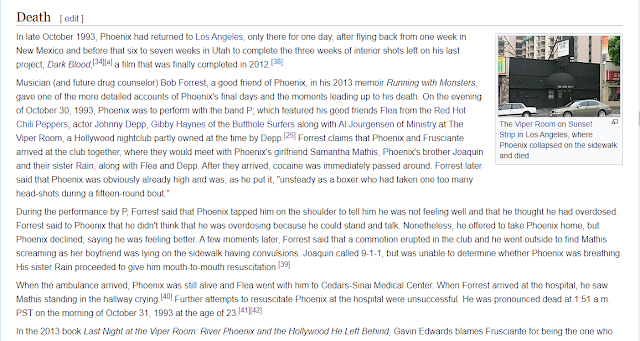 Someone keeps asking me to cover River Phoenix's death..

Halloween leaves 61 days in the year...

It's rumored that a guy named "John Frusciante"=163 gave him a blue cup to drink with drugs....

The final film he was in didn't release until 9/27/2012....the Jesuit anniversary....I only find this funny because it also stars actor Jonathan Pryce who many believe is actually Pope Francis...

Jonathan Pryce born on 6/1.....2012 was after the Batman Shooting and just before Francis became the Pope...Joaquin Phoenix synced to Joker/Batman..

I'm also curious because this film came out 69 days after the Batman shooting....River Phoenix died 69 days after his bday at the club partly owned by Johnny Depp who was born on 6/9....Batman shooting on the anniversary of the Moon landing in 69' during the sign of Cancer that looks like a "69".

Posted by The Mindless Freaks(Dan Behrendt) at 2:09 PM