Chiefs Marcus Peters suspended for throwing "Flag" into the "Stands" Caught by Jews?-Pittsburgh The City of Bridges-Steelers-The Dark Knight Rises 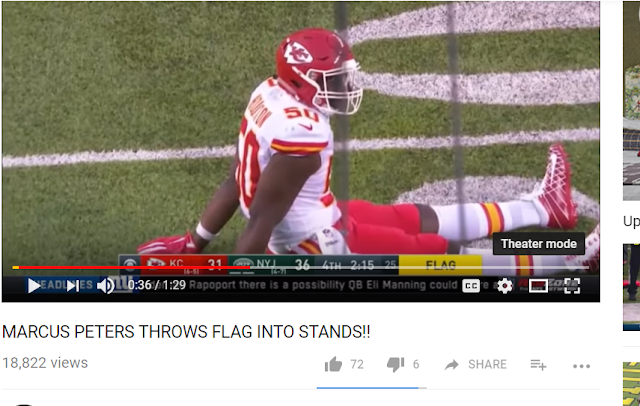 Watch the clip above in the link. Just before Peters throws the flag the announcers say, "There gonna get Nelson for Holding". Then they zoom in on # 50 of the Chiefs for no reason...unless you understand Gematria.

The penalty called on Steven Nelson who was born on 1/22.
Kansas City=122


Also just think about everything I've been saying this year in regards to the NFL. It's synced up to the death of Charles Manson/Helter Skelter/Blacks Rising Up/Not Standing for the National Anthem to honor the Flag.
Now Peters throws a "Flag" into the "STANDS"...It's absolutely hilarious if you are aware of the scripting in these games.
If you don't understand what I just said...think about it...he throws the "Flag" into the STANDS.....The big controversy in the NFL is because people aren't STANDing for the Flag/National Anthem.

Remember in regards to Kansas City too.
Harry S. Truman was the only president to die at the age of 88 and he died in Kansas City, Missouri...where Arrowhead Stadium is located.
Kneel=88=Trump=Colin Kaepernick=The Star Spangled Banner=Great Garrison Flag=US Bank Stadium and so on...

Possibly nothing but I want to note that the guy who caught the flag in stands seems to be wearing Pittsburgh Steelers colors on his jacket.
Steelers=31
Chiefs had 31 points at the time....
Steelers=50(rev red)
Pittsburgh=50

Maybe I'm missing something but look at his buddies next to him as well. Are they wearing the Yamikas? Jews?
New York Jets=60
Oakland Raiders=60
Donald Trump=60
Nigger=60 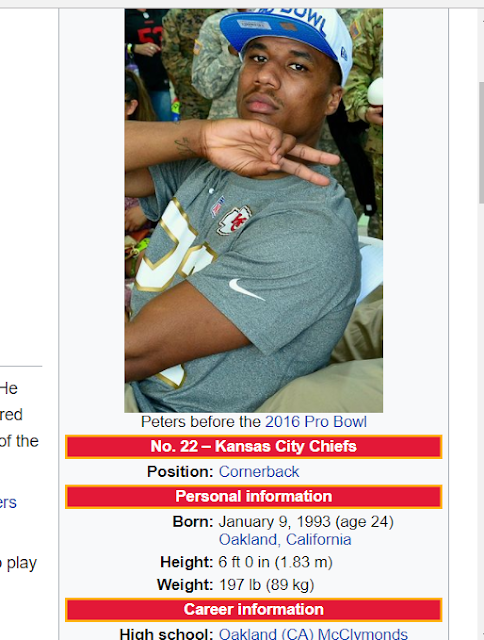 How funny that they just announce Peters is suspended before the Oakland Raiders game...Notice he is from Oakland...
Think about Oakland in regards to the Flag/National Anthem stuff that began with Colin Kaepernick in the San Francisco/Oakland Bay Area.
The Black Panthers founded in Oakland and so on...
He wears # 22...
Oakland=22

Something I never knew before was that Pittsburgh is known as the "City of Bridges". How interesting in regards to what I have been saying about Philadelphia and the Ben Franklin Bridge...Also the Minnesota Bridge Collapse.....It would make a lot of sense but we will see.
Thinking about Ben Roethlisberger too in regards to a big theme in the media of Sexual Allegations....Remember he supposedly raped some girls....Ben Rapelessberger....
Also remember the collapse in the Batman movie that involves the Steelers at the football game.....According to the film "Oblivion" 2017 is the last Super Bowl? Just some things to think about....
Steelers=103
Dark Knight=103
Remember they blow up the "Bridges" in that Batman movie as well...so it's fitting the Steelers were involved in the film.
Christian Bale(Batman) is also in a lot of movies related to what I've recently documented. Winona Ryder got his a part in "Little Women". He was a voice in Pocahontas(Trump Navajo's), He was also in 3:10 to Yuma...
Batman=261(satanic)
Yamaka=52, 443(Jewish)
443 is the 86th prime number.
The Batman main player is # 86 Hines Ward...
Hines Ward=52(rev red)

Another interesting thing is the Marcus Peters play happened with 2:15 left in the game...
Benjamin Roethlisberger=215
The Dark Knight=215(reverse)...the film is DK Rises though...

Posted by The Mindless Freaks(Dan Behrendt) at 4:43 AM