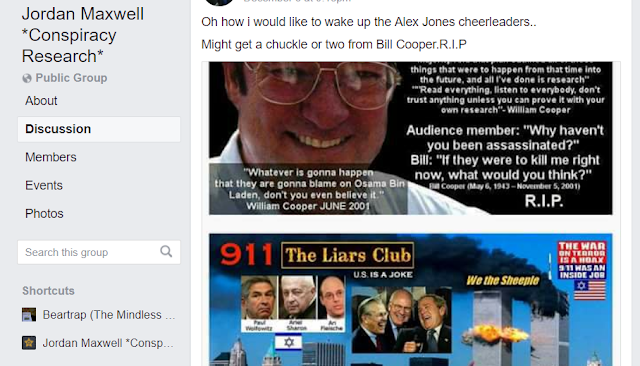 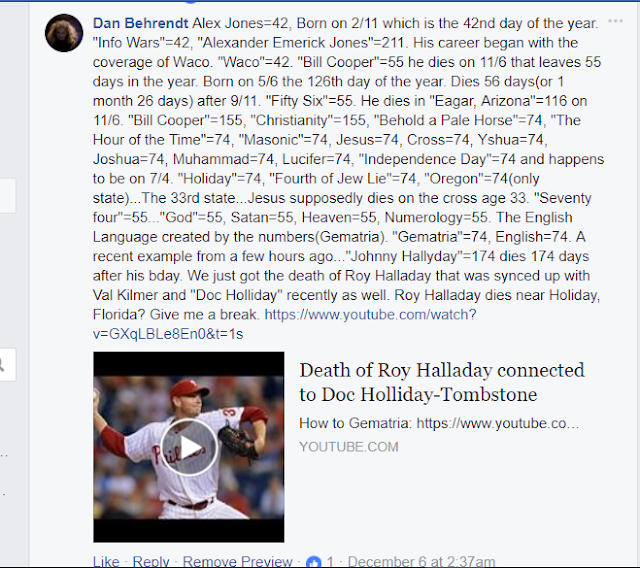 I was listening to Zach's video a bit ago and I thought it was funny as I just posted about Alex Jones a few nights ago on a Facebook Group I got added to a while back.
Anyway I got up to Pee and when I came back and sat down I told our baby kitten "There You Go". I said this because he always sits on my lap and was mad that I moved, so I said "There You Go" as I sat back down for him.
Right as I said this, Alex Jones says "There You Go" on the video I was watching.
There You Go=58, 139
Freemasonry=58, 139
There are just too many people that hate Alex Jones and love Bill Cooper. Or they think Aaron Russo was a good guy too.
Aaron Russo=42, 129(reverse)....dies on 8/24 that leaves 129 days in the year. Born on 14/2. "Forty Two"=142.
I have my suspicions about a lot of people...
Eustace Mullins(see my previous posts on him and Ezra Pound)
I have the same feelings about Jordan Maxwell and many others...
Maxwell interestingly enough is the only one that doesn't have a Wikipedia page of him though.
You don't get on the film Zeitgeist if you aren't part of the propaganda. If they didn't want people to wake up, they would have never let Zeitgeist even be released.
There are so many people out there doing exactly what I have been saying for a long time. Awakening people but making sure it's on their terms and keeping them in a controlled state of awakeness.
I remember watching a video with Alex Jones at the Bohemian Grove years ago and knew it didn't make sense. There was a part where David Gergen gets mad at him for calling out Bohemian Grove and says..."Listen, I don't know anything about You or your film" and blah blah blah. Why would he even say that? It's hard to explain without a clip of the video, but if you ever come across what I'm saying it's obvious Jones was part the gang and was purposefully supposed to make that film. 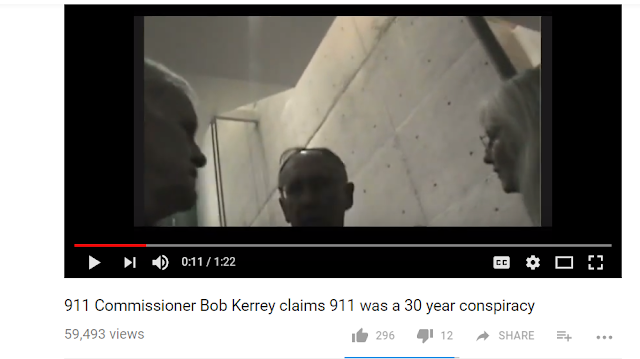 Bob Kerrey says 9/11 was a 30 year old Conspiracy Video
Anyway the reason for this post is because it reminded me of this clip too. Bob Kerrey says 9/11 was a 30 year old conspiracy which it was.....but listen to what the reporter says.....Under Article 3 Section 3 of the constitution.
Bob Kerrey the 35th governor of Nebraska.
Nebraska=35
All of this stuff was put in our faces to see. This interview was staged or at least made famous because it's part of the awakening propaganda. That's why it's Article 3 section 3...(33).
They also switch camera angles for whatever the reason right as he's saying the stuff about 30 year conspiracy.
Youtube did the same thing promoting the shit out of the Prince video saying Osama Bin Laden getting ready to bomb that is obviously edited.
How do some of these Youtubers get footage of these false flags/hoaxes in the media that can't be found anywhere else?
The agenda is real and we have a president who is supposedly against "The System" for a reason. It's the same reason we got Pizzagate and now bringing up the Hollywood Pedophile ring.


Posted by The Mindless Freaks(Dan Behrendt) at 3:03 AM