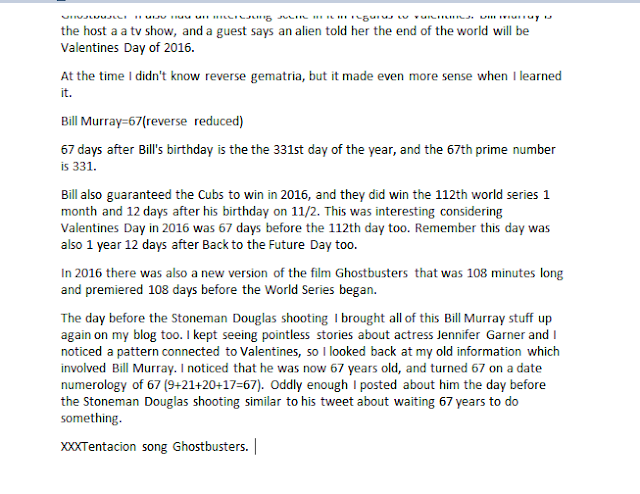 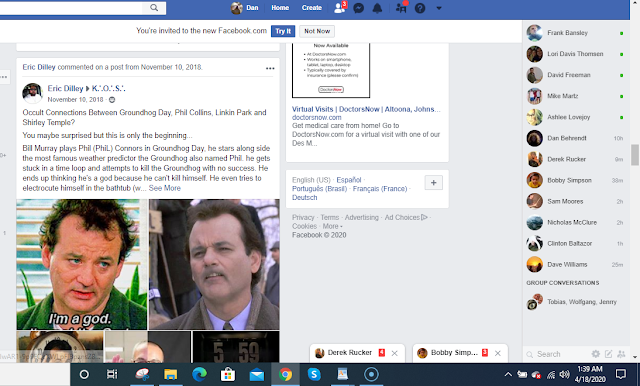 I have been working all day on this book trying to organize how all of these narratives come together. Today I wrote about much of the 2017 into 2018 stuff...Bridges/Eagles/Stand By Me/Stoneman Douglas and more....for the past few hours however I have been writing about Bill Murray...it's taking forever because I want to double check my information and I'm noticing new things as I go as well. Anyway I finally had enough as I still don't feel that great and I have to work in the morning. While I was emailing a backup copy to my email, I figured I would check out Facebook. What are the odds that 3 posts down as I'm scrolling it's one about Bill Murray? It also involves Chester Bennington, who I also just wrote about. He was in the band Linkin Park and the St. Valentines Day Massacre was in Lincoln Park and so on....
Interesting from this I just discovered that...
Chester Bennington=624(Jewish)
This number became my obsession soon after Stoneman Douglas, and it was important to the Indians who the Cubs had beat in the World Series.

The post was from Eric Dilley, and notice the post originated on my birthday in 2018.
He only posted in the post because he watched the film "Out of Shadows" and it reminded him of that post.
Out of Shadows=67(s)
Out of Shadows=158
This happened 1 year 5 months 8 days after 11/10/2018.
lol I have to point out that "Freemasonry"=158 too as I'm pretty sure Eric is a Freemason. I don't think he's a bad person because of it either. He seems like a genuine guy trying to find truth, and I agree with a lot of what he says in regards to how Zach often does gematria.
Not everything is done by the Freemasons, and everytime you see a number...for example 58, it doesn't mean the Freemasons are behind it. It could be related, but usually it's important to many other things. As I've said many times, there is an individual path for everyone to see how this world is coded, Zach's just so happens to be always blame it on Freemasonry.
Don't take this that I don't agree with Zach to an extent either, but the point I'm making is that not every single story with a certain number means Freemasonry is behind it. I mean think of how many times I have figured out a narrative by understanding patterns in my own life and how they are connected to the news.

Anyway, I'll have to check it out when I get a chance and think more about this, but I am exhausted..Just wanted to point out the synchronicity.

Posted by The Mindless Freaks(Dan Behrendt) at 2:20 AM