Bill Withers death in relation to Kobe Bryant and Coronavirus 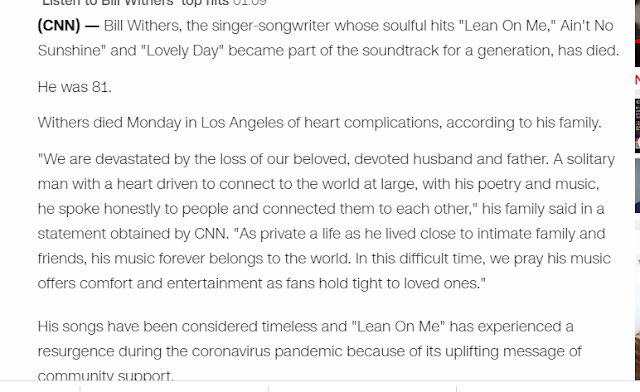 Bill Withers actually died on 3/30, but the media waited until today 4/3 to tell us.
I honestly wonder if this is connected to the Austin Powers stuff I have been documenting about.
Withers wrote the song "Just the Two of Us"....which is also important to the Fresh Prince/Will Smith.

They reveal his death the same day it's announced Kobe will be inducted into the NBA Hall of Fame too.
Just wondering considering he died age 81.
Kobe Bean Bryant=81
Withers dies in Los Angeles...

It's also interesting Bill Withers didn't die from coronavirus amongst the hysteria..
Bill Withers=56 and 70
Coronavirus=56 and 70

In light of Coronavirus and the King Symbolism..it reminds me of 2015 when Ben E. King died and then 2 weeks later B.B. King died...both remind me of Withers to an extent. Or I guess just famous old black musicians.

Posted by The Mindless Freaks(Dan Behrendt) at 8:05 PM