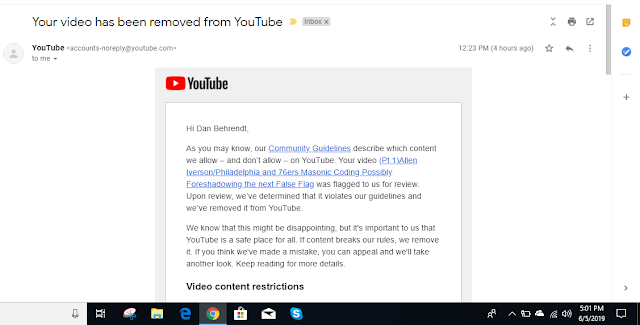 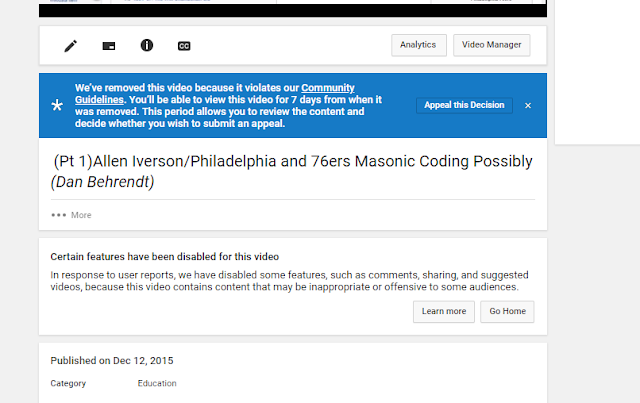 Youtube took down one of my old videos today.
The video about Allen Iverson/Philadlephia and the next possible False Flag.
Tell me this isn't on purpose...
Today is 6/5 which is the 156th day of the year.
Philadelphia=65
False Flag=156 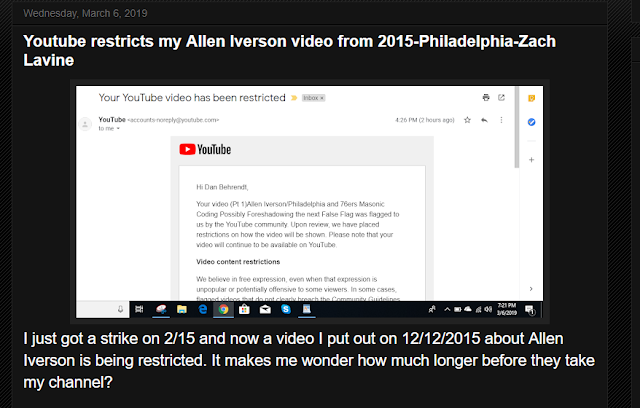 Youtube also restricted this video back on March 6th which is the 65th day of the year.
The Philadelphia 76ers lost their 65th game of the season on this day because of a buzzer beater by "Zach Lavine"=65
Allen Iverson=56, 65
Three=56(his number)
Got in Trouble after 3 years of High School at a bowling alley.
Circle Lanes=56
Bowling Alley=56
Mike Bailey=56(HS coach)
Got out of jail because of "Thomas Brokaw"=56
Larry Brown=56
Reebok=56
Thug=56
Off the Bench=56
Dress Code=56
Washington DC=56(Georgetown)
Magic Johnson=56(AI the first Guard since Magic drafted #1)


It's also interesting I put this video out on 12/12 which is Bob Barker's bday....only interesting as I've just mentioned him again last night along with the Jeopardy stuff...
The Price is Right=174
False Flag=174
Bob Barker is important to Happy Gilmore who learns to putt on the Earthquake Golf Course...the building that falls over looks like the Comcast Center in Philadelphia..


A big thing that Iverson is connected to is Virginia...I had to separate this video into sections because I got a Youtube Strike for my Bridgewater shooting video(Virginia)...also connected to Philadelphia....The last biggest earthquake east of the Rockies was the Moneta, Virginia Earthquake...It's why the stuff with Lil Bow Wow in connection to the Blackface/Virginia Cavaliers was important too this year...as it was connected to Allen Iverson and the film "Like Mike"...
Michael Jordan....the original capital of the country Jordan was called "Philadelphia" and it was destroyed by Earthquakes.
Remember Zach Lavine born on 3/10 which is the day MJ retired from baseball....Osama Bin Laden's bday...

Also Hulk Hogan got his revenge against Earthquake at the Spectrum in Philadelphia..which is why it's important that Patrick Ewing was a coach at the Spectrum Center in Charlotte...the team Michael Jordan owns. Ewing and Iverson the only 1st picks in the draft from Georgetown.
Plus the 76ers last season at the Spectrum was the year before Allen Iverson became a 76er.
Ewing currently 56 years old....

All the stuff from a few weeks ago in regards to my friend Tom is important as well. He always used to wear a Jerry Stackhouse jersey when I lived with him. I'm not sure if it's his favorite player, but the Dallas Mavs were his favorite team and he always wore that jersey. Stackhouse was originally a 76er with Allen Iverson.

Looking back at the Summer Slam that Hogan got his revenge at...it was 8/27 which is the day Haile Selassie died and date I've been watching for....Patrick Ewing also from Jamaica...

Posted by The Mindless Freaks(Dan Behrendt) at 7:48 PM