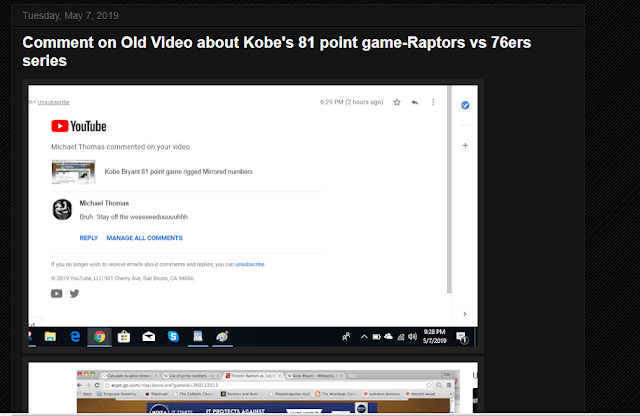 I still don't have internet but I have my phone that goes super slow. I have to document this before I forget.
The Raptors just won the NBA Finals of course in Game 6 and Toronto is known as the 6ix. Also today is 6/13..
The 6th prime is 13.
Six=52
Klay Thompson=52...no wonder he had to leave the game with a fake knee injury.
Also I loved how there was .9 seconds left and they fouled Leonard making him shoot 2 more free throws. It made the score total 114+110=224.
Toronto Raptors=224
Kobe Bryant=224(Franc Baconis)

I mention this because remember how I got a Trolled comment on my old Kobe video on 5/7...the day before Durant first got injured? I talked about how Kobe tore his achilles against the Warriors in the year 13'...then made his comeback against the Raptors who were also the team he scored 81 points against.
Kobe was important to LeBron's injury as well...
I just find it interesting because Durant ends up tearing his Achilles like Kobe.
Remember Achilles was killed by Paris in Mythology...think about the France symbolism.

Everything with Kobe Bryant was important to the number 34 which is interesting as I got that message 34 days before Durant tore his Achilles.
It's also why DeMarcus Cousins became a Warrior in which I have previously talked about. He tore his achilles as well. Cousins known for being a "KING"...then Luke Walton becomes the KINGS head coach...LeBron is the KING...It's why the Virginia Cavaliers won the College Tournament.

The NBA Finals=111
Durant tore his achilles 111 days before his bday.

Looking back at my info, remember LeBron tweeted the Lyrics about the Jewish Money in the song "ASMR". On wikipedia is shows us a guy with the last name that has ASMR from Jordan who was a Guantanomo Bay prisoner...Just pointing this out because Gitmo was important not too long ago...

Plus a lot of the coding was connected to Philadelphia in which Kobe Bryant is from..and Jordan finished his career against. Remember how Summer Slam is important to Philadelphia and this year it's on Hulk Hogan's bday in Toronto.

There has to be a riddle with John Wall rupturing his achilles at home too. Think about how Durant is from Washington DC and the Wizards play in Washington DC.

Kevin Durant's childhood favorite team was also the Raptors haha. He tears his achilles against them in the finals of all places?

I know there has to be something important to the War of 1812 as well. They really made it important in these finals of the song "O Canada"...and the War of 1812 is where the US Anthem came from and US fighting Canada...

Posted by The Mindless Freaks(Dan Behrendt) at 12:52 AM