Rockets win with 98 points over the Warriors in Game 5. 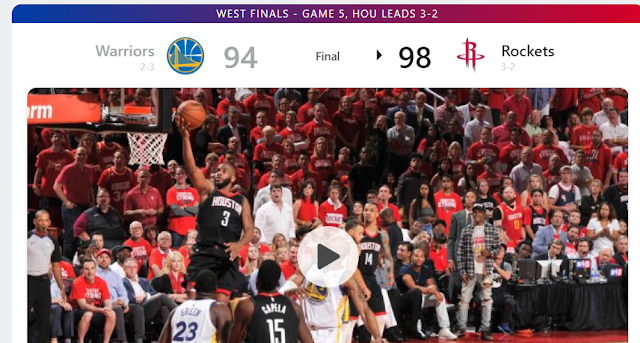 I was watching the post game and they "accidentally" showed the score as Golden State with 98 and Houston with 94....I find this interesting as remember in 2015 the number 98 was important to the Warriors and the finals. They went to Overtime 98-98 and it was 98 days after they lost to Cleveland in regular season.
Also with the School schooting on Valentines Day I want to point out again how the Warriors won 122 days after Valentines Day..
Golden State=122
Think about it in regards to the 98th season of the NFL too.

It's interesting though that this year not only did we get the Valentines shooting we got a school shooting in Houston...

Chris Paul faked a Hamstring Injury tonight as well....I still think Rockets will win...Remember everyone was counting the Eagles out of the Super Bowl, yet they won it with Foles....possibly the narrative if Paul doesn't play again in this series?
Andre Igoudala=112=Houston
Remember in 2016 when Steph Curry hurt his knee against the Rockets when the score was 56-56=112....Just before he fell Andre Igoudala fell down too. "Wardell Stephen Curry II"=112....Curry fell because of a Wet Spot....Draymond was mad about the questions about the Houston Floods....think about that in regards to this past year....This was the same year Chris Paul supposedly broke his hand too and the reason the Warriors played the Blazers instead of Paul's Clippers in the 2nd round.
I wonder if Steph Curry will get hurt now in Game 6 or 7?

Anyway what I find interesting is...
Hamstring Injury=206
I've recently been documenting about this number with Cuba/Stock Market.....Also my grandma dying 206 days(end date) before my uncle. My uncles son was the only Eagles fan I know and him and his brother are also both Rockets fans.
My half cuban friend Tom's name equaled 206 as well....I'm trying to remember what his favorite team was.....I remember him wearing a Jerry Stackhouse (Dallas) jersey a lot, but not sure if he was a Mavericks fan or not? 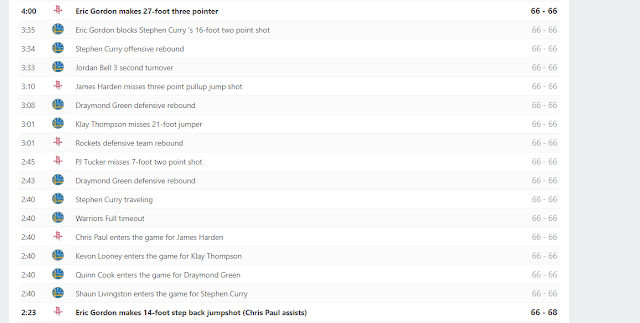 Chris Paul's injury comes when the score is 94-95....reminding us of the last time the Rockets won the Finals....

I still think it's going to be Rockets vs Cavaliers but there are some interesting other things.....such as the Rockets have only been to the Finals 4 times....They won in 94 and won in 95....but they lost in 81' and 86'....both times they lost it was to the Boston Celtics.
I slept on the Celtics all year, and I wonder if some of the stuff I was talking about with the Cavs vs Rockets is significant to the Celtics....Such as the Caldwell Pope stuff playing against the Cavs and Rockets, but not against the Warriors....also the date of Isaiah Thomas becoming a Laker.

Ha,  I see Thomas became a Laker 112 days before the finals begin...

Posted by The Mindless Freaks(Dan Behrendt) at 1:37 AM