Zach's Livestream with Richard Quinn on his birthday 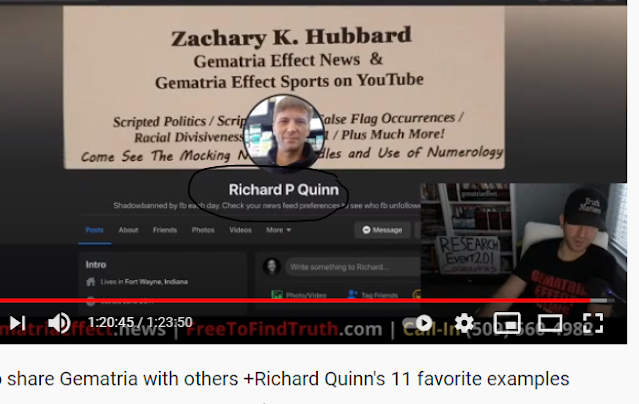 I tuned into this Livestream earlier about halfway through and Rich was talking about how how personal things don't matter. For example if his address was 322 or bday was 3/22 it doesn't mean that he is part of Skull and Bones and so on....I understand the message he is trying to convey, because he wants to expose the Cabal and the media, but I think when people say this type of thing it misleads people.....
If his address was 322 or his bday was 3/22 it is important and should be paid attention to. It could be connected to Skull and Bones at some point in his life, and it could play a role in understanding a different narrative he may be following. I just want people like Rich to understand that not everything is the Cabal, and in fact even if a media story has a 322 it doesn't necessarily mean Skull and Bones either. There is so much with gematria that people are missing and not awake to and it drives me crazy sometimes.
This livestream for instance.....Zach says he didn't realize that today was Rich's bday.....Not only was today Rich's birthday, but it was his 42nd birthday.
Birthday=42
Rich's 11 Favorite Examples on the day leaving 11 days in the year. Although there's actually 12 if you watch the video.

Notice Rich's bday is 7 months 1 day before Zach's bday....Also 152 days after Zach's bday...
Richard Quinn=71
Richard P. Quinn=152
These type of things need to be included in this research because they show that not everything is the "Cabal". If we don't show that these things are constantly happening as well, then it's not the real truth.
I guess Rich is a Jesuit..
Jesuit=42
Catholic=71
Do you see my point?
There is probably a lot more as to why this syncs up this way that I will never understand because it's personal to them too...they have to pay attention to actually see how their own lives connect to this happening.
Rich Quinn=224(FB)
I'm all for waking people up to this knowledge too and I do respect what they are trying to do, but I don't believe the main solution is to take down the Cabal. We can kill every single person involved in ruling us with this knowledge, but that still leaves us in a coded world. The Cabal is not the real problem we are facing, they just have an understanding of the problem and have been using it...The true problem is this matrix type world we are living in.....The true problem is that we have no clue why we exist or what we are existing in and no solution can be fathomed until we learn more.
Posted by The Mindless Freaks(Dan Behrendt) at 2:59 AM