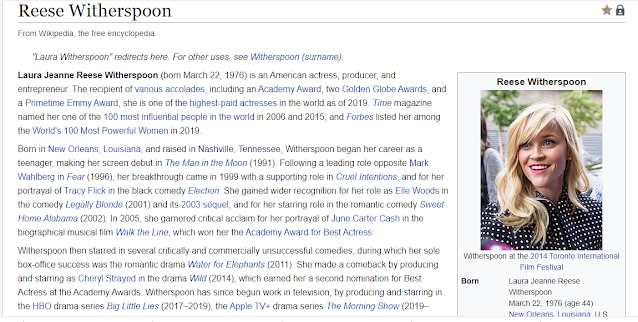 I find it strange that a pointless story about Reese Witherspoon is in the media. The story came out yesterday...
The reason she stands out is because I've recently talked about the film "Little Nicky" and Reese is his Angel Mom..She also knows Chubbs and so on...
Notice Reese was born in Louisiana, but grew up in Nashville, Tennessee too....This comes just after the Nashville bombing..
flummoxed=260(FB) also 40 and 41
All of these numbers were important to Nashville..
Isn't "flummoxed" a strange word to use as well?
Even stranger this would be a headline story considering it happened 18 years ago at the 2002 Oscars.

This also means that Reese and Ryan's bday's are a span of 194 days apart.
Ryan's bday is also the same day that Richard Leon was appointed as a judge by George Bush...Richard Leon is also the judge who approved the Time Warner merger with AT&T.
Reese's bday of 3/22 also sticks out in regards to George Bush and Skull and Bones...322...This story came a span of 2 months 23 days before 3/22.
I can't help but think there is something important to Buffy the Vampire Slayer here either....Sarah Michelle Gellar is in "Cruel Intentions" with Reese and Ryan...
I'm not sure but just thinking here...Patricia Arquette portrays Little Nicky's girlfriend Valerie....David Arquette in Buffy...I see Patricia Arquette stars in "The Act" too....Just last night a girl at work told me to watch that show, and I've never heard of it until then either.
Posted by The Mindless Freaks(Dan Behrendt) at 7:56 PM