Usually at work while I'm cleaning the oven I listen to some YouTube videos. I was going to listen to the Gematria Effect but I'm assuming that Zach didn't do one this week...but his video about the death of Lorenzo Taliaferro stuck out to me so I listened to it..then like an hour later I got a notification about the story on my phone.
Right away what stuck out to me is that he wore the number 34 for the Baltimore Ravens. I further know it's important because it said Zach had 34 comments too...
Recall the Ravens just beat the Browns scoring 47 points and the last time the Ravens won a Super Bowl it was SB 47...
SB 47 was on the 34th day of the year..
There was a power outage that delayed the game for 34 minutes when the score was 28+6=34.
The Ravens won scoring 34 points.
Ravens=34(S)
Joe Flacco=34 and 47(MVP of SB 47)
After SB 47 the Ravens gave Joe Flacco a record breaking contract on 3/4.
Harbowl=34
It was also synced to Pope Francis becoming the new pope..
Francis=34
Ravens=38 and won 38 days before he became the Pope.
The Ravens also won SB 35 with 34 points over the "Giants"=34
In SB 35 the 34th point came by a 34 yard field goal of Matt Stover... 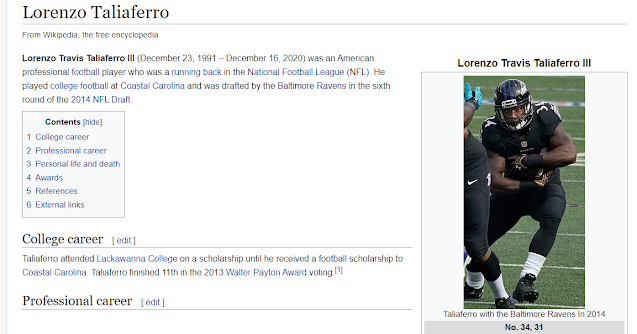 Something that stands out to me with his death in regards to Art Modell is that I documented about his death in connection the Rams going to Super Bowl 53....
Art Modell=53
Notice Taliaferro died 53 days before SB 55...
Los Angeles=53
The Rams were originally from Cleveland..and the Ravens just played the Cleveland Browns...plus the Ravens were formed because of the Browns and so on...
Cleveland is named after MOSES Cleaveland..
Moses brought in the Age of Aries(Ram).
This stuff was also a lot to do with the number 34..
Rams=201(Jewish)
Plus the death of Rafer Johnson in relation to Rosey Grier has me thinking about this...Rosey Grier played for the Rams as one of the "Fearsome Four".
Further, Taliaferro went to college at Coastal Carolina...I've recently been talking about the Native American theme again, which pretty much began around the time of Coastal Carolina winning the College World Series...I even recently re-watched my old videos about this college world series and how it led up to me thinking a Native American theme was important.
I'm just looking at some of the teams in the NFL and the Saints are pretty interesting too..
New Orleans Saints=224
This year important to the Catholic Church...the 201 stuff really got big when Zach went to Louisiana...
Taysom Hill was important to the Nebraska Cornhusker/Ram/Mormon stuff too. Drew Brees is going to comeback against the Chiefs this week...The Chiefs also important to the Moses/Mormon narrative.
Kobe Bryant important to the number 34 and Batman/Ravens too...
New Orleans=126
DeMarcus Amir Cousins=126
Posted by The Mindless Freaks(Dan Behrendt) at 12:58 PM