I just mentioned how Ozzy and Sharon were important in my post about Tiny Lister and now a story that Sharon Osbourne had Covid 19.
Covid Nineteen=67 and 68
The story says she shared the news yesterday which was a span of 67 days after her 68th bday.
Sharon Osbourne=67
Ozzy Osbourne=1967(Jewish)
Little Nicky=67
Notice its also 2 months 6 days after her bday..
I also mentioned the importance to Queen Elizabeth in that post and the numbers 26 and 62.

It's also interesting that I woke up today with a notification on my phone from Zenith about sharing my song on YouTube called Ein Sof..I wrote this song in 2013 but I have never played it live anywhere...in my post about Tiny Lister I also mentioned how I played an open Mic last week and it's funny because I only played a few of my songs and I played Ein Sof for the first time live..I only played the open Mic because my friend Pat was hosting it and didn't have enough people sign up so I came and played a 15 min set to fill time.

Notice I put that song on YouTube on 6/7 though..

Even Crazier is that I just went to Zenith channel and it says that he currently has 67 videos....but I just counted his videos and its the 68th unless I messed up...so he had 67 videos before this...interesting with the 67 and 68 above too..
12+15+20+20=67
Daniel Behrendt=67
A few people call me that, but its mostly people who have known me since I was young.
Ein Sof=68 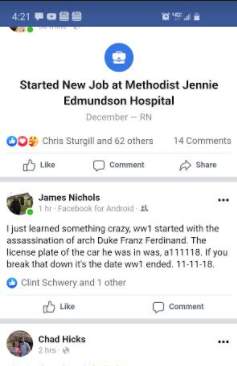 The date 6/28 also stood out today when I was drawn to this post on Facebook about Franz Ferdinand....when I looked him, he died on 6/28....also born on 12/18...which I feel like there is something special I am to see...
It's 38 days after my 38th bday..
I used to make rap beats for my friend and I do have a rap album of my own...although it's really my own style that might not be considered rap...I just called it that.
Rapper=38
Of course we know all of the negative things that can be associated with that, but it could also be good and connected to the fact I study "Gematria"=38 and "Kabbalah"=38...
Casino=38
Lottery=38
Gambling=38
It could be a good sign to go to the Casino as well.
Interesting though that my friend I used to make rap beats for has name gematria of 68 and 67 too though...possibly he will just message me or I'll have another important sync with him that day.
Cleveland Indians=67....
ZENITH OF THE ALPHA America=116
One other thing I can't shake is that my best friend has name gematria of 67 and he is a Cleveland Indians fan....12/18 is my sisters wedding anniversary and a few days ago at work I heard the song "My Best Friend" by Tim McGraw....whenever I heard this song I think how it was my sisters wedding song...and also a song played at my friends funeral....A good and bad experience with the song....
6/7 was Prince's bday and Mike Pence(Indiana)...
I guess I'll figure it out soon enough lol....I really want to stay up and look more at this/make some videos, but I have been feeling awful since Sunday..and I finally feel like I can sleep.
Posted by The Mindless Freaks(Dan Behrendt) at 11:46 PM